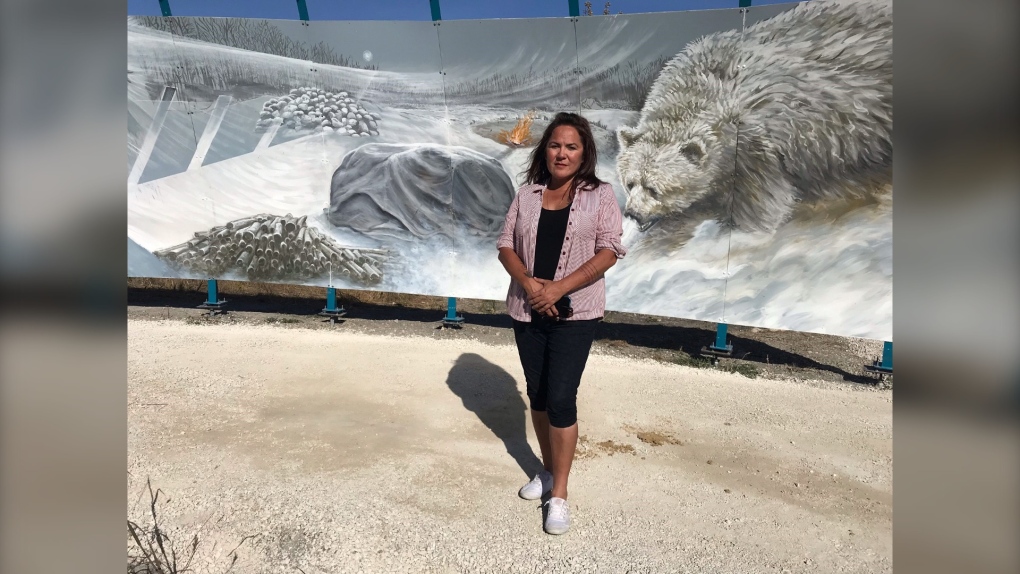 It’s shaped like a turtle shell and consists of four large murals depicting the spiritual journey of the Anishinaabe. A project known as the Sacred Spirits of Turtle Island.

The new amphitheatre space sits outside Gaynor Family Library in Selkirk, Man. and has been designed for survivors and families of missing or murdered Indigenous people.

“When I started out on my healing journey, I had to travel to Winnipeg to get supports. And sometimes that was difficult for me to do,” said Jeannie White Bird, a survivor, family member and the project’s coordinator.

It’s an art installation White Bird, whose own mother died from violence, collaborated on with several artists. White Bird wants it used as a place where community members can gather together and heal.

A project White Bird started on in 2019 was unveiled Monday on MMIWG2S Awareness Day, two years after the National Inquiry issued its final report and 231 Calls for Justice.

More support for Indigenous-led prevention and healing programs—like what White Bird envisions will happen in the new space—is one of the short-term priorities identified in the National Action Plan stemming from the 231 Calls for Justice.

Implementing the priorities was the focus of a virtual panel discussion Tuesday made up of National Action Plan working group members.

During the conversation Hilda Anderson-Pyrz, co-chair of the National Families and Survivors Circle, highlighted the importance but difficulty of getting programs up and running.

“As organizations, many of us are struggling and always trying to find resources to be able to adequately provide services to create that impact on the ground,” Anderson-Pyrz said.

Ottawa has earmarked $2.2 billion for implementation of the National Action Plan.

The Sacred Spirits of Turtle Island received support from the federal department of Women and Gender Equality, a project White Bird believes will fill a need.

“I’m helping with those calls, those 231 Calls for Justice but I’m also not doing it by myself,” White Bird said. “I have so much support.”

White Bird hopes educational sessions can be held in the library, with ceremonies, gatherings and teachings taking place outside in the amphitheatre.