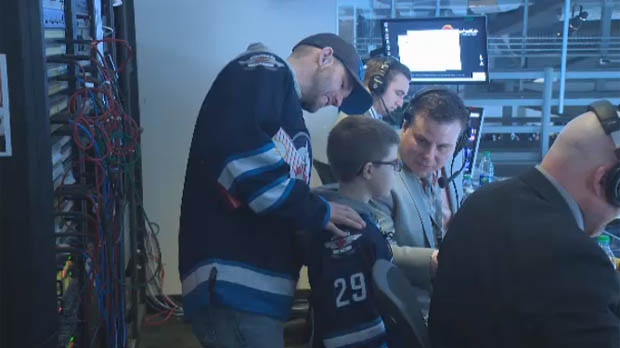 Benjamyn 'Benny' Francey got a tour of the MTS Centre ahead of the Winnipeg Jets game on Saturday.

A Manitoba boy got to see his first Winnipeg Jets game on Saturday, even though it was his second time going to a game.

The first time Benjamyn ‘Benny’ Francey went to a Jets game, he couldn’t see the players. Now, the legally-blind 10-year-old with a rare eye condition has a set of powerful glasses that will allow him to see the action.

Ken Curtis, vice-chair of the board of directors at the Canadian National Institute for the Blind, arranged for his employer Assiniboine Credit Union to sponsor tickets to the game.

Benny also received a jersey with the name of his favourite player, Patrick Laine.

“Benjamyn’s been pretty excited. He’s been to a Jets game before, but that time, unfortunately, he couldn’t see the players. So this time, he’s really excited to see the players,” said Jenna Cason, his mother.

Before the game, Benny was taken on a tour of the MTS Centre, where he got to check out the view from the announcer's box.

Last year, a fundraising campaign raised $20,000 to pay for a pair of eSight glasses, a wearable, hands-free headset that uses a high-speed camera to capture everything the user is looking at and display it on an LED screen in front of the user’s eyes.