No incidents at Portage and Main party of 1K people: police 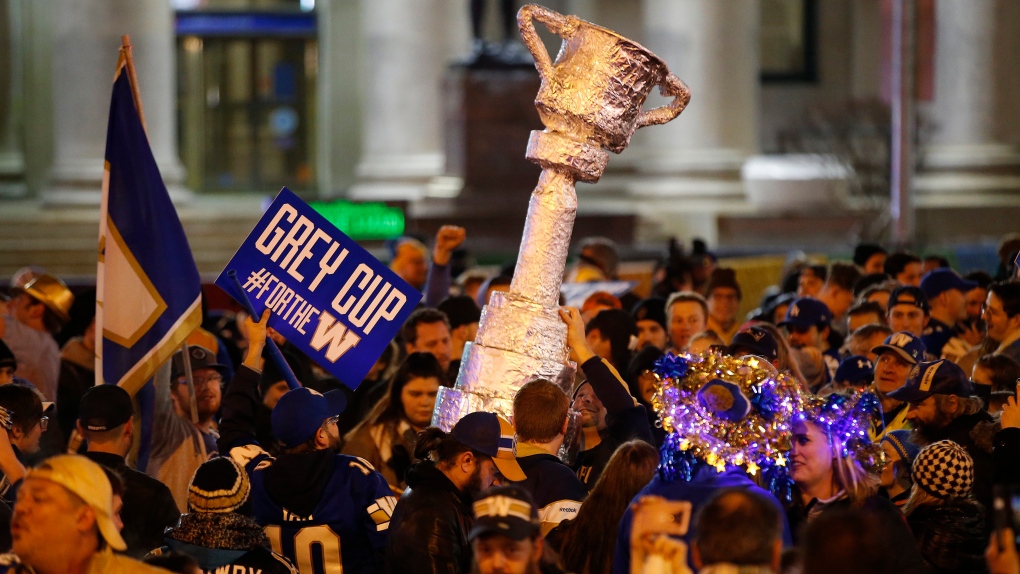 Winnipeg Blue Bomber fans celebrate winning the 107th Grey Cup over the Hamilton Tiger Cats at the intersection of Portage and Main in Winnipeg Sunday, November 24, 2019. It's been 29 years since the Bombers last won the Grey Cup. THE CANADIAN PRESS/John Woods

WINNIPEG -- From a police perspective, it was quiet. From a fan perspective, the impromptu street party Sunday evening following the Blue Bombers’ decisive Grey Cup triumph was anything but.

It was an exuberant celebration 29 years in the making.

At the corner of Portage Avenue and Main Street, fans dressed in Bomber jerseys from many eras, or in wacky blue-and-gold themed costumes high-fived each other continuously and shouted congratulations to their team.

The party is on in the #Peg! Hundreds have gathered at Portage and Main to celebrate the @Wpg_BlueBombers Grey Cup win. #ForTheW pic.twitter.com/SJfHKkCohj

The crowd was estimated at around 1000 people.

For many fans, either on the street or at one of hundreds of Grey Cup gatherings across the city, it was a night of overwhelming emotion after a 29-year Grey Cup drought.

Fans eventually dispersed after a long night of partying, but they’ll get another chance to celebrate at the Bombers’ Grey Cup party, set for Tuesday afternoon.