Number of workers with COVID-19 at Brandon, Man. pork processing plant now at 22 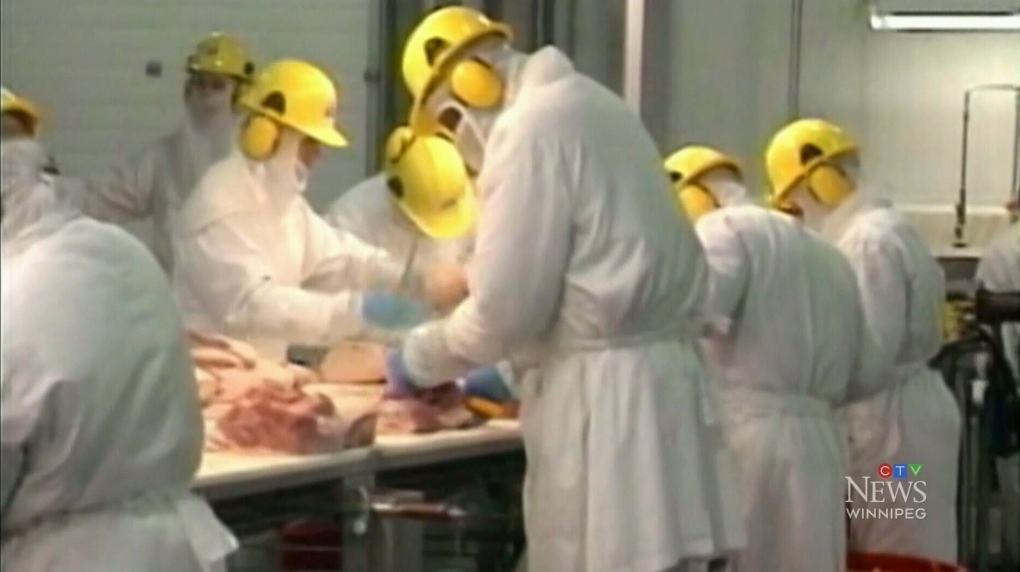 WINNIPEG -- The number of COVID-19 cases in Brandon, Man. — including those among workers at a pork processing plant, whom public health officials say contracted the virus outside the facility — continues to rise.

A total of 64 people with positive tests are now linked to a cluster in the western Manitoba city, chief public health officer Dr. Brent Roussin said Monday during a regular COVID-19 briefing.

Workers at Maple Leaf Foods are being hit particularly hard but production continues at the pork plant.

Health officials and the company insist the site is safe but the calls to temporarily close the plant are getting louder.

“Shut it down before somebody dies,” one man told a CTV News reporter as he drove off the plant’s property with a passenger in the vehicle on Monday afternoon.

That’s not sitting well with the spouse of one of the plant’s 2,300 workers, who CTV News isn’t identifying.

“She was worried a lot because if she gets infected with the virus, she used to say that I may transfer it to my kids,” the man told CTV News in an interview in Brandon.

The company said the decision to stay open is based on advice from public health, inspections by regulators, and their own safety protocols.

Janet Riley, vice president of communications and public affairs at Maple Leaf Foods, said some of the affected workers include those involved in food production.

“There are people who work in a variety of different departments but again when they’re working in food production, or any area of our plant, they’re wearing masks, they’re wearing full personal protective equipment,” said Riley. “We have so many steps.”

The Canadian Food Inspection Agency (CFIA) said in a statement it doesn’t have the authority to suspend operations at the plant.

The CFIA said that decision would be made by the operator of an establishment with direction from public health officials.

“The CFIA’s oversight at federally-registered meat facilities relates to food safety. CFIA veterinarians and inspectors are in these facilities to enforce federal standards for the safe, humane slaughter of food animals, the mitigation of health and food safety risks associated with the slaughter or processing of meat products, and for export certification,” the CFIA said. “When cases of COVID-19 occur in a federally-registered food processing or meat slaughter establishment, the CFIA works with local public health authorities to help determine the level of risk of exposure for its employees working within that establishment.”

All of the affected workers at Maple Leaf, which Roussin only referred to as a business in Brandon, contracted the virus outside the plant and there’s no evidence it’s spreading within the facility.

Roussin said the business is going above and beyond safety recommendations, including having a larger number of workers self-isolate than required.

Roussin said the 64 cases now linked to the cluster in Brandon started when someone didn’t isolate properly after travel.

“Geographically there’s certain just areas within the community that people are living together and they’re connected frequently,” said Roussin. “So there just was a lot of contacts early on in the cluster.”

He said given the high number of cases in Brandon, reintroducing stricter public health measures targeted to certain geographic areas isn’t out of the question.

“We haven’t been looking at anything specifically right now, that’s always obviously on the table,” said Roussin. “But for right now we’re certainly talking about Brandon where we see this cluster."

Meantime long lineups for COVID-19 testing stretched eight city blocks and some local businesses have limited their services over concerns of potential exposure.

“It’s definitely taken a turn here in the last week but I think as a business community as a whole we’ve done an excellent job trying to flatten the curve like it was a few months back,” said Day.

The resurgence of COVID-19 worried some but many say they’re just being more careful by wearing masks and continuing to physically distance and regularly wash their hands.

“I’m staying positive that as long as we all kind of know what we should do, maybe we’ll be on the downside of this upturn soon,” said Brandon resident Louise Albertson as she waited for the bus near the city’s only COVID-19 testing site.

In response to the demand for testing in Brandon, it’s expected a second testing will be added at the Keystone Centre by Tuesday.