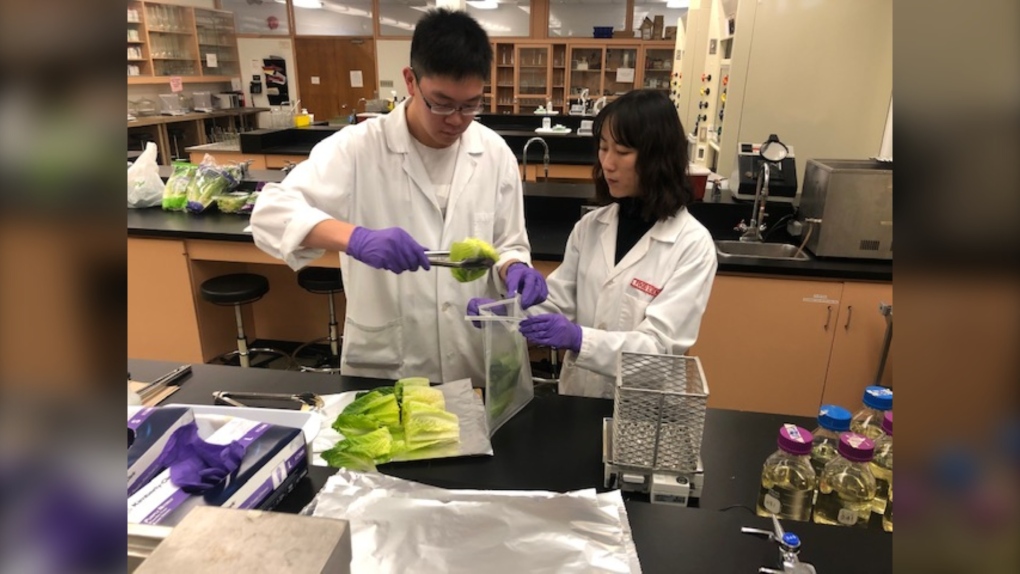 WINNIPEG -- According to the Canadian Food Inspection Agency since the beginning of 2018 there have been 32 recalls of leafy greens or salad products containing leafy greens. All were related to bacteria, mostly E. coli O157:H7 and listeria.

To get a snapshot of what’s on store shelves today, CTV News collected a sample of leafy green products from various Winnipeg grocery stores and had them tested for those two kinds of bacteria. Two pathogens that can lead to serious health problems if consumed.

“It produces a toxin or poison that can cause all kinds of problems. The most frequently encountered is diarrhea that might be bloody or could cause kidney failure.”

One of the more memorable cases was last November when the Public Health Agency of Canada warned Canadians of possible E. coli contamination in romaine lettuce.

“Industry got ahead of the problem and pulled products off shelves in stores and that’s why people saw empty shelves basically during the holidays actually,” said Charlebois. “So that’s why this recall or this situation became quite visible for a lot of people and it stayed on people’s minds.”

According to the US FDA investigation summary, that outbreak was traced back to one on-farm water reservoir in California. There were 29 confirmed cases of E. Coli in Canada because of it, none of them in Manitoba. The outbreak was declared over in January.

Charlebois expects more preventative recalls to happen in the future to limit the risk to consumers.

“What would be out of the ordinary is to see contaminated products on shelves, but it will continue to happen from time to time,” he said.

“The fact they were all negative is good because likely the industry is doing their due diligence and they are doing a good job getting the produce safe.”

Narvaez said in order to measure the actual prevalence of E. Coli and listeria, a much larger sample size collected over a much longer period of time would be needed.

“If we got a sample that was positive here, that would be worrisome because that means they would be having a lot of produce or bagged salad that are contaminated,” she said.

She noted that producers have rigorous testing standards to follow, but still consumers are never going to be 100 per cent free of risk.

“It’s like every time you drive a car or fly there is a chance that something might go wrong and there’s a chance you’ll have a crash or something like that. It’s just a possibility,” she said.

“If you are healthy you should be ok and if you are immunocompromised you probably want to cook your vegetables or be careful with your choices.”

Have your own food safety procedures

Narvaez said once you buy produce, it’s on you to keep it clean.

For lettuce, she suggested to make sure the product is packaged or bagged properly and to avoid consuming leaves that have visible damage.

“If Listeria is already internalized or attached it’s going to be really difficult for you to eliminate it by just washing the lettuce or any produce. So there is only so much you can do with that.”

Another tip she suggested is not keeping groceries in the car for an extended period of time. She also said to eat the leafy greens soon after you buy them because listeria can grow even when in the fridge.

Dr. Embil says if everyone is at some sort of risk to being exposed to bacteria on food.

“The key thing to do is go to the Public Health Agency of Canada website about food safety and follow the instructions and make sure that your fruits and vegetables have been washed prior to use.”

You can also sign up for recall notifications from the CFIA here.