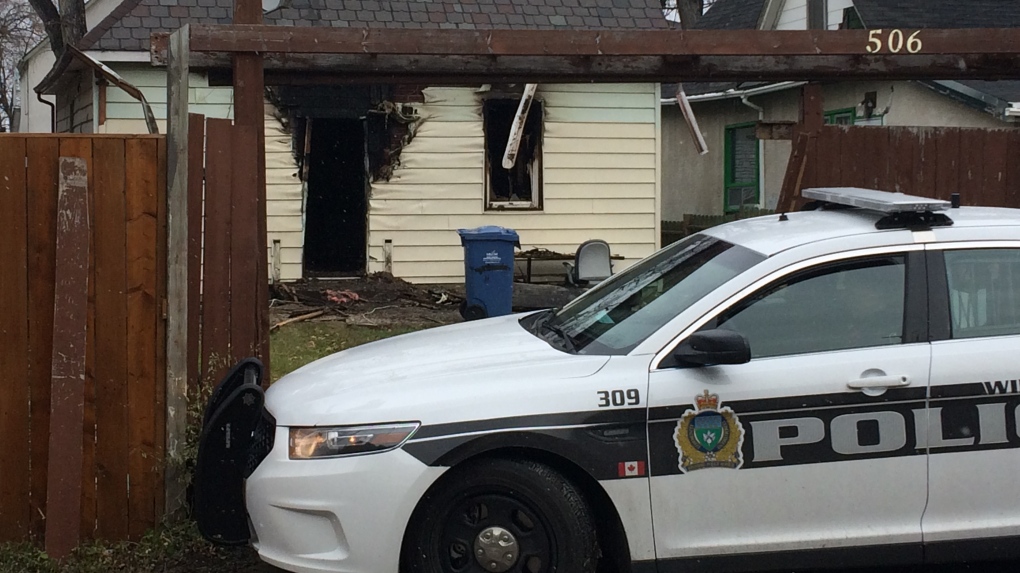 A person was taken to hospital in critical condition after being pulled from a fire in the 500 block of block Pritchard Avenue. Police are pictured at the scene Friday afternoon. (Jamie Dowsett/CTV News.)

WINNIPEG -- Firefighters in Winnipeg were kept busy Thursday night into Friday morning, responding to five separate structure fires in as many hours, including one that sent someone to hospital in critical condition.

All but one of the fires involved homes, according to the Winnipeg Fire Paramedic Service. The other involved a silo.

The first call came in at 9:46 p.m., when a fire in a single storey home was reported in the 900 block of Inkster Boulevard. Everyone inside had escaped by the time crews arrived and one person was taken by paramedics to hospital in stable condition after being assessed at the scene.

The fire was under control by 10:10 p.m. The next call came in three minutes later.

The second fire involved a one-and-a-half storey home in the 500 block of block Pritchard Avenue that was giving off heavy smoke and flames.

That’s where firefighters had to rescue someone who was found during the initial search of the home, the person who was taken to hospital in critical condition after being treated at the scene. The home was badly damaged, the fire service said, and the fire was declared under control at 11:19 p.m.

The third fire, at a silo in the 3000 block of St. Mary’s Road, was reported at 11:08 p.m. Because the silo was outside the city’s water service area, water tankers had to shuttle water to the fire, which was declared under control shortly after midnight. No one was hurt, the fire service said.

The next call came in at 12:22 a.m., when firefighters were called to a one-and-half storey home in the 5700 block of Roblin Boulevard.

Heavy black smoke was seen pouring from the house when crews got there. It took about an hour to bring the fire under control and no one was found inside the home when it was searched. No one was hurt.

The last fire was reported at 1:10 a.m., when firefighters were called to a two-storey home in the 300 block of Burrows Avenue. One person had got out before firefighters arrived and the fire was under control by 1:32 a.m. No one was hurt.

The city said the causes of all fires are under investigation and no damage estimates were available.