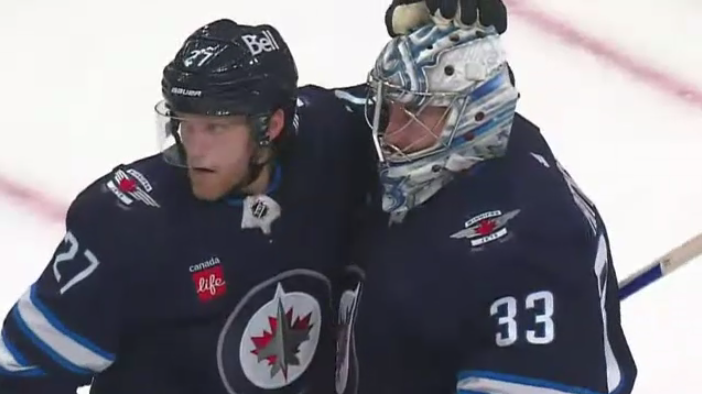 Kyle Conner had a goal and two assists, Mark Scheifele scored short-handed and Nikolaj Ehlers also scored for the Jets in the final tune-up for both teams ahead of their 2022-23 NHL regular seasons. (Source: TSN)

CALGARY -- The Winnipeg Jets capped their pre-season Friday with a second straight decisive win over the Calgary Flames.

Pierre-Luc Dubois scored a pair of first-period goals in a 5-3 victory at the Saddledome after the Jets blanked the visiting Flames 5-0 on Wednesday.

Kyle Conner had a goal and two assists, Mark Scheifele scored short-handed and Nikolaj Ehlers also scored for the Jets in the final tune-up for both teams ahead of their 2022-23 NHL regular seasons.

"Starting to come together," Scheifele said. "The last two games were pretty good. We'd probably like a little more o-zone time. We're excited to get the season going and see what we can do in real games."

Tyler Toffoli had a goal and an assist with Blake Coleman and Nazem Kadri also scoring for the Flames.

"Giving up 10 goals in two games is not good enough, so a lot to clean up," Flames centre Elias Lindholm said.

Dubois didn't return for the second period with what the Jets called a lower-body injury.

"It was more precautionary than anything," Jets head coach Rick Bowness said. "He's had something lower body that's been bothering him a little bit that flared up."

Winnipeg capped the pre-season 4-1-1 and host the New York Rangers in their season-opener Oct. 14. Conner led the Jets in pre-season points with four goals and four assists in three games.

"Still lots of work to do," Scheifele said. "We've got lots of practices from now until the start of the season to hone in on a few things, clarify a few things."

Bowness 67, was the head coach of the Dallas Stars for three seasons before stepping behind Winnipeg's bench this season.

"Coach has been great," Scheifele said. "Really helping us. A lot of video, a lot of teaching, which has been awesome. Guys are really excited about our system and how it's going to be implemented."

Both teams played lineups closely resembling their opening-day rosters and started their aces in goal Friday.

Winnipeg's Connor Hellebuyck made 35 saves for the win, while Calgary's Jacob Markstrom gave up five goals on 16 shots.

The Flames announced earlier Friday an eight-year, $50-million contract extension for defenceman MacKenzie Weegar, who was acquired in a July 25 trade with the Florida Panthers alongside Jonathan Huberdeau.

Calgary's power-play was scoreless on four chances Friday and 0-for-10 in the two losses.

"Coming from the game in Winnipeg, we wanted to come out and have a good performance," Toffoli said. "It wasn't good enough."

Kadri scored with 3 1/2 minutes left in the game from the slot on a behind-the-net feed from Toffoli.

Scheifele scored short-handed on a two-on-one with Conner at 16:52 of the second period to give the Jets a 5-2 lead. Conner's laser one-timer at 9:27 beat Markstrom on Winnipeg's second shot of the period.

The Flames pulled within a goal on Coleman's goal at 5:29. Hellebuyck made the initial save on his off-speed shot from the slot, but the puck deflected off Jets defenceman Brenden Dillon and behind the goalie.

Winnipeg was outshot 15-6 but led 3-1 after the opening period.

Dubois' power-play goal at 17:17 was his second of the period. Scheifele on the wing fed an unchecked Dubois in the slot to roof the puck top corner.

Toffoli finished a passing play with Huberdeau and Lindholm off the rush at 15:05. Huberdeau's spin move along the defensive zone boards gave him a lane up ice. Lindholm dished to Toffoli down low for a successful shot.

Winnipeg led 2-0 at 8:29 when Ehlers corralled the puck off the glass and put it off Markstrom's arm and into the net.

Dylan DeMelo's shot from the boards pinging off sticks and bodies beat Markstrom far side at 4:18, with Dubois awarded the goal.

This report by The Canadian Press was first published Oct. 7, 2022.