The Winnipeg General Strike, which began on May 15, 1919 and lasted six weeks, saw tens of thousands of unionized and non-unionized workers walk off their jobs, as well as the arrest of labour leaders and violent confrontations break out in city streets.

On the 100th anniversary of the Winnipeg General Strike, author and historian Michael Dupuis tells CTV News what prompted the strike and how what appeared to be a failure at the time served as an important lesson in the labour movement which helped it gain power and traction afterward.

Dupuis said the strike was organized by labour leaders with fresh memories of strike success after a 1918 general strike in Winnipeg lasted four weeks.

“Because the war was on, the federal government sort of forced the employers to agree to the terms of the strikers,” said Dupuis.

“And that emboldened labour, they figured that if that tactic worked, a year later, it also would work. But they were misguided,” said Dupuis. “Because the war was over and now the city fathers were not going to be as easily persuaded to agree.

“Employers decided they were going to teach the workers a lesson, ‘We’re not going to let this general strike succeed,’” he said.

Dupuis said the 1919 labour action began with demands from metal trade and building trade workers, who asked for higher wages and better working conditions, including a 44-hour work week.

“And probably most important, they wanted union recognition, or what we would term now as collective bargaining,” he said.

But their employers refused, so they appealed to the Winnipeg Labour Council, who then held a vote to decide if workers from other trades should join them in their fight.

“And the vote was overwhelmingly in favour of a general sympathetic strike to take place at 11 a.m. on May the 15,” said Dupuis.

However workers began walking off before the clock struck 11 a.m. Dupuis said women who worked as telephone operators left their posts at 7 a.m.

“By the end of the day, reports were there were upwards of between 30, 35,000 people who just walked off their jobs. And only 12,000 were unionized. The rest were workers who were non-unionized, and many, many women,” he said, adding women who worked in the confectionary, service and hotel industries walked off their jobs.

As the workers organized, so did those in opposition. Dupuis said business leaders and professionals also organized against the strike, forming the Citizens Committee of 1000. It was announced May 16.

“And they were determined to crush the strike.”

Strike begins in near-blackout of news

Dupuis said news coverage of the strike was minimal as it got underway as typesetters and pressman with three Winnipeg newspapers walked off the job within two days of the strike’s start, along with staff in Winnipeg’s small Canadian Press bureau.

“So for a while, not only was they city paralyzed in terms of services, but there was no way to get news out.”

The three local newpapers began publishing again around a week later, filled with editorial takes against the strike.

“For the most part, they were on the defensive, just saying, ‘Well, look, you know, we’re just asking for legitimate labour demands, collective bargaining, and now we’re being attacked as communist.”

Ten days after the strike began, demands to return to work were made of postal workers and civil servants, and thousands of strikers rallied at Victoria Park in refusal.

Police were also forced to take a stand.

“Almost a month into the strike the mayor asked, not asked, demanded from the police they sign a loyalty pledge, never to go on strike again, and no sympathy strikes, and not to join any unions, and so they refused. So the police force was fired, almost en masse,” said Dupuis.

It was replaced by a force of special police, who Dupuis said were paid $6 a day and armed with clubs.

“And the first day that they were out, it was a show of force, they wanted to show the population who controlled the streets. And right at the corner of Portage and Main there was a melee, a confrontation, a lot of busted heads and bruised people but no fatalities,” he said.

Taking to the street

In the third and fourth weeks of the strike, thousands of returning soldiers participated in a series of marches, held both in support and against the strike.

“And this created unrest and tension in the city, so the mayor made some proclamations that mass assemblies, you know, marches, demonstrations, were forbidden.”

After that, the federal government worked with the Royal North-West Mounted Police and the Citizens Committee of 1000 on a covert operation to quell the strike, by going after its leaders.

“They arrested six strike leaders and four foreigners and they brought them out to Stony Mountain Prison.

“The thinking, by the authorities, was that if they cut off the head of the leadership, that the strike would just fall apart. But they were wrong.”

Dupuis said on Friday, June 20, 1919, between 5,000 and 6,000 returned soldiers met at Market Square to plan a silent march the following day, from City Hall to the CPR Hotel, where they planned to confront the minister of labour. But authorities found out about the planned demonstration and hatched a plan of their own.

“Just before the march started, the authorities arranged the North-West Mounted Police to break it up. They also had about 1,500 special police, wearing arm bands and carrying clubs, and then there were militia that were going to be coming onto the streets, including militia with vehicles that had Lewis machine guns. So the scene was set.” 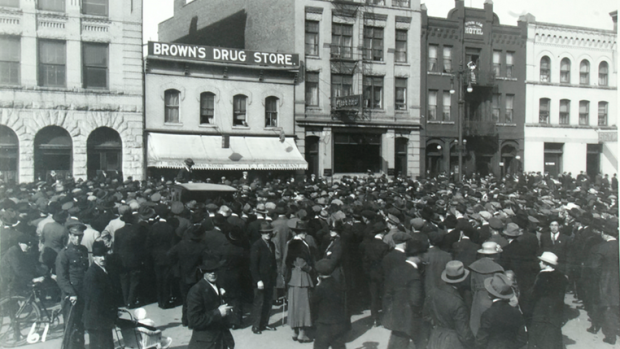 Photo taken by L.B. Foote of crowds on Market Street between King and Princess on June 21, 1919.  (Source: Archives on Manitoba.)

Dupuis said there was around 20,000 people assembled near city hall, where the mayor read the Riot Act from the steps. That’s when Mounties began charging around city hall and back to Main Street.

“And on the third charge, they pulled out their 45s and started shooting to disperse the crowds,” Dupuis said.

One man who was shot died immediately and another died the following day from injuries.

“In one alleyway, at both ends were special with clubs, and they trapped about 200 people.”

“And then from both ends of the alley, the specials attacked, and another 10 or 15 minutes later there were lots of injuries, people arrested and so on.

“That day, Bloody Saturday, really broke the back of the strike, and five days later the strike committee agreed it would end the strike on the condition the provincial government set up a commission to investigate why it had really happened.”

Dupuis said strike leaders were tried the following fall, after being charged with conspiracy to overthrow the state. He said while it would have been a difficult to prove, a private prosecutor was hired to represent the Crown.

“The same lawyers who had been members of the Citizens Committee of 1000, they took charge of the private prosecution.”

Dupuis said R.B. Russell was tried alone before the other strike leaders and was found guilty and sentenced to two years in Stony Mountain.

The other strike leaders were tried together, and all but one who was acquitted were found guilty, while foreigners who had been arrested faced deportation.

“So the outcome for the strikers was not very good.”

Loss in the short-term becomes lesson for the future

“It was a dismal failure, you could say,” said Dupuis. “The only thing the strikers actually gained was to have a commission investigate the causes of the strike.”

Dupuis said that commission found the strike was not an attempt at revolution, but a reaction to factors like inflation, a high cost of living, and lack of work for returned soldiers.

“So the immediate result was the strikers were badly beaten, however what the strike leaders did was they learned from this experience that a tactic like a general strike was just not going to work. The state had too much power, ultimately.

“So they told their members to turn to the ballot box.”

Dupuis said labour candidates were soon elected to both civic and provincial offices, including three MLAs who were still in prison for their part in the strike.

“The day that they were released, they walked over to the legislature and were sworn in as MLAs.”

Dupuis said one strike leader went on to be elected mayor of Winnipeg, while others helped form the party that eventually became the NDP.

“The long-term results were very positive for labour,” Dupuis said, citing the introduction of collective bargaining.

“These goals really started before the strike, but the strike was a climax. It was a major time for the workers to realize that they didn’t have to sit passively anymore.”

You can also explore where else in Winnipeg and online you can go to learn about the strike by clicking here.