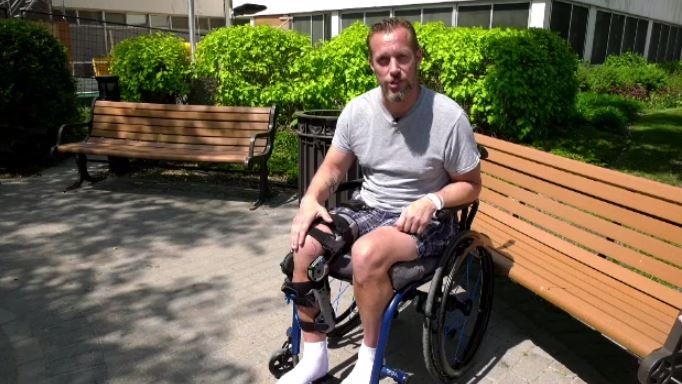 Dan Wischnewski said he was left with serious injuries and a long road of rehab after a driver blew through a stop sign at Garven Road and Provincial Road 206.

Days after a man who survived a terrible crash near Oakbank called for safety changes at the intersection, the provincial government is stepping up.

Dan Wischnewski told CTV News on Thursday he was left with two broken hips, bleeding around his brain and a year of rehab after a driver blew through a stop sign at Garven Road and Provincial Road 206.

On Tuesday, the province said it’s adding a number of safety features to the corner, including reducing the speed zone on PR 206 for vehicles approaching Garven Road.

Right now the speed limit along 206 is 100 km/h. The revised speed will be 70 or 80 depending upon final traffic analysis, a provincial spokesperson said.

To make stop signs more visible, they’ll be fitted with a red flashing light and flags will be placed ahead of the signs along the road to warn drivers.

Rumble strips will be also be added in front of the stop sign on Garven Road.

The province said it’s also looking at the possibility of making the corner a roundabout.

“I’m super excited. It’s a huge victory,” said Wischnewski. “How many lives is this going to save?”

He said he hopes speaking out helped the government make a final decision about the changes.

The Rural Municipality of Springfield said it sees quite a few crashes at the location and asked the province for the upgrades.

“We are very pleased the province is acting so quickly on these important safety measures at the intersection,” said Mayor Tiffany Fell in a news release.

The province said the upgrades will be completed by early July.