Scheifele gets SO winner as Jets beat Stars 4-3 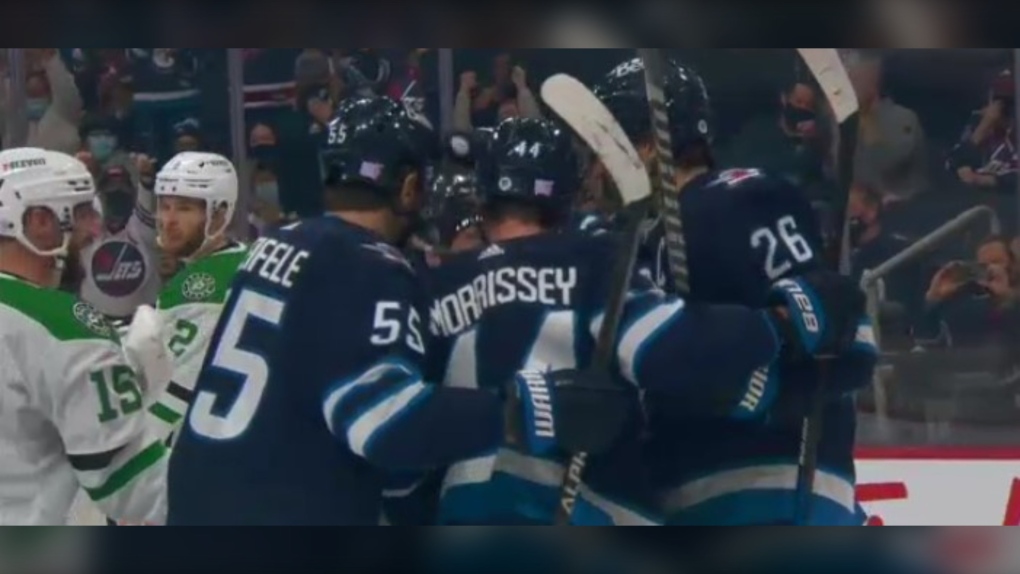 Mark Scheifele scored the deciding goal in the shootout in his return from COVID-19 protocol, leading the Winnipeg Jets to a 4-3 win over the Dallas Stars on Tuesday night.

Scheifele missed five games and Winnipeg went 4-0-1 in his absence.

"I guess COVID only makes you stronger," joked Scheifele, who was Winnipeg's leading scorer last season. "It was great. It was awesome to be back for the boys. I had a blast. It was huge to get the win and so fun to be back. It was my first game back in front of the Jets fans again, so it felt even better."

Jamie Benn, Jason Robertson and Tyler Seguin scored for Dallas, and Braden Holtby made 33 saves. Joe Pavelski scored in the shootout for the Stars.

Trailing 3-1 after two periods, the Stars scored a power-play goal at 8:43 of the third to pull within one. Robertson pounced on a loose puck in the crease that Comrie had failed to cover up for Robertson's first of the season.

Dallas tied it with less than seven minutes remaining in the third. Seguin tipped defenseman John Klingberg's point shot past a screened Comrie.

We were down two goals going into the third period and we were able to tie it up, so I was very encouraged with the third period," Dallas coach Rick Bowness said. "I always say when you lose in a shootout, you don't lose the game, you lose in a skills contest. For 65 minutes, we played them even and they scored the extra goal in the shootout."

Winnipeg opened the scoring midway through the opening period as Stastny deflected a point shot from defenseman Nathan Beaulieu and Holtby inadvertently swept the puck into the net behind him.

Benn's goal at 16:16 of the first period knotted the score 1-1. Seguin passed to Benn alone in front of the net and the latter deked Comrie before putting the puck in the net.

The Jets scored a pair of power-play goals in the second period when the Stars had a goal disallowed.

A goal by Dallas forward Roope Hintz was waived off after Winnipeg's challenge for offside was successful.

The Jets then took advantage of an extra man again when Dubois scored at 7:23.

Although Dubois' goal went in off his skate, Bowness said he was not allowed to challenge whether or not there was a kicking motion, leaving it up to the league to decide.

"The second period, we obviously inflicted a lot of damage to ourselves -- penalties and we got dominated on faceoffs," Bowness said. "Then, we just kept icing the puck, so the second wasn't very pretty. But we made up for it in the third. We responded really well. We had multiple choices in that third period."