Charred rubble is all that remains of a strip mall in Steinbach after a fire ripped through the building over the weekend, releasing toxic smoke and killing dozens of animals at a pet store.

Crews with the Steinbach Fire Department were called to the strip mall on Main Street between Friesen Avenue and Reimer Avenue around 3:30 p.m. on Sunday. The building housed a paint store, a pet store and a flooring retailer.

Autumn Poitras, a resident in the area, said she heard the alarms Sunday afternoon.

"I go peek outside and I see smoke billowing and I noticed a strange smell," she said.

Looking at the burned-out rubble is difficult for Steven Larson, the manager of the Best West Pet Foods store that was inside the mall.

"I knew it was bad, but still, seeing it in person it is just even worse than I was thinking it would be,” Larson told CTV News.

He had got a call from an employee working at the store Sunday afternoon, telling him she smelled smoke. Larson figured it was a loose or frayed wire – nothing serious – until his employee called back a few minutes later in a panic saying smoke was pouring through the vents.

By the time Larson got to the store, fire crews were already battling the blaze. 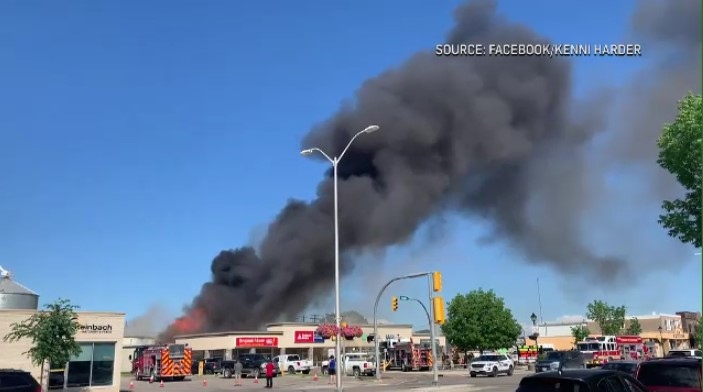 The fire began at a strip mall in Steinbach on July 10, 2022. (Source: Facebook/Kenni Harder)

"We weren’t allowed back in the building, but a couple fire fighters they… went and grabbed all the animals they could, so we got some of them out – not nearly enough, but we got some," Larson said.

He said though there were more than 100 animals in the store, only three reptiles – two bearded dragons and a chameleon – were saved from the fire before things took a turn for the worse.

“Not long after that I saw the flames start from the top of the building," he said. "We are attached to a paint store and a flooring store with a lot of flammable materials there, so once it started going it went pretty quick.”

Kelvin Toews, the fire chief of the Steinbach Fire Department, said crews from the fire departments in La Broquerie and Hanover helped fight the fire.

"We determined that it was not safe for us to be in the building anymore. We pulled out and went on a defensive attack," he said.

It was a challenge made even more difficult as flames spread within a paint and flooring store, both containing highly flammable materials.

This prompted an air quality advisory.

In a statement, the Steinbach Fire Department said an air quality advisory was issued in Steinbach “because of the nature of the contents” of the structure involved. The City of Steinbach tweeted that the smoke is considered toxic.

1 of 2 We are continuing to battle a significant fire on Main Street between Friesen Avenue and Reimer Avenue. Due to the contents of the structures involved in the fire, the resulting smoke is considered toxic.

While the warning was lifted Monday afternoon, Toews said smoke may continue to linger.

“People in the direct vicinity here should still be cautious," he said. "There will be residual smoke coming off the building but it shouldn’t go much further than a block.”

Toews said crews were on the scene overnight Sunday and throughout the day Monday battling the fire and extinguishing hotspots.

Investigators are still trying to determine the cause of the fire, however the building is a total loss. Toews said there were no injuries reported.

Larson said, while he figures out what his next steps are for the pet store, the community has rallied around him.

"We are all feeling so much love from the community, with people just worried for us and they feel almost as devastated as we do," he said.

An Edmonton woman says she heard someone calling for help moments before a man was killed by an LRT train in Edmonton on Monday.

Ukraine's Zelenskyy: No talks with Russia's Putin if land annexed

'We shouldn't have to push people': Most provinces have not made Sept. 30 a stat holiday

Justin Trudeau travelled Tuesday to Nova Scotia and P.E.I., where he pledged to find ways to build more resilient infrastructure after inspecting the extensive damage caused by post-tropical storm Fiona.