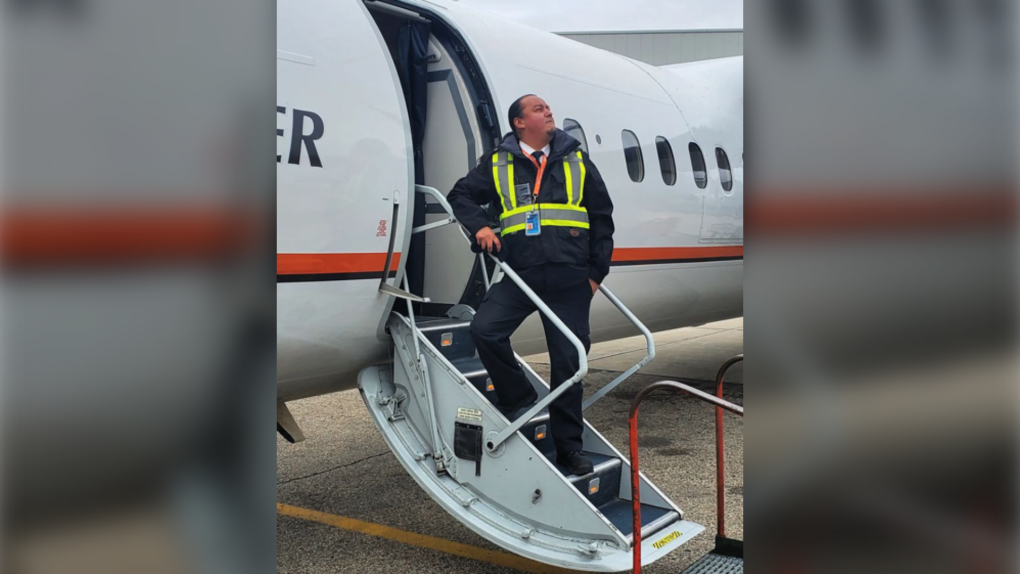 Timothy Atik (Tik) Mason has fond childhood memories of boarding large aircraft that would take him from Winnipeg to loved ones in his home community of St. Theresa Point First Nation in northern Manitoba.

"It was like this big, huge, magic machine when I was a child," Mason said in an interview with The Canadian Press.

"At a very young age I developed this kind of wonder about it."

The 43-year-old now pilots those planes.

Mason spent his first few years in St. Theresa Point before moving south to Winnipeg. The Oji-Cree community is only accessible by airplane or winter ice road, so many residents become acquainted with flying early in life.

These trips back home sparked an interest that would lay dormant for decades.

Mason was working as a bartender but searching for more career stability when one of his regular customers offered to take him flying as a gesture of appreciation.

"It just kind of sparked (something) in me, kind of like a light bulb. Like, this is what I'm looking for -- being up in the air and having that sort of freedom and that sense of always being on top of things."

He began flight training in 2016 and last fall, his childhood aspirations came full circle when he landed a Dash 8 turboprop in his home community.

The aircraft was owned by Perimeter Aviation, an airline that serves Manitoba and northwestern Ontario.

His parents, relatives and council members were there for the landing.

"It was quite an emotional experience for myself to be able to be there," Roy Mason said about watching his son fly.

Mason worked full-time to fund his training, which happened once or twice a month. Around 2018, he was awarded the Bill Wehrle Scholarship named after the founder of Perimeter.

The scholarship allowed Mason to move to New Brunswick to attend MFC Training, a pilot school in Moncton.

Chris Walsh, director of quality and safety at the school, first met Mason in the spring of 2018.

"He's kind of a sponge, seeking information from people who have been doing it for a long time and kind of looking for every little stream of information to be able to mould himself a little better," said Walsh.

Mason became an instructor with the school in 2019, a role in which Walsh says Mason excels.

"His desire to reach out and help people is a rare commodity in today's environment. He's lending a hand whenever required and also seeking out and letting people know when he needs help."

The decision to leave Manitoba for the East Coast was not an easy one. Mason spent years touring as part of the award-winning bands Burnt Project 1 and Indian City. It was on one of these tours that he received word a family member had died.

When it came time to advance his career as a pilot, he worked with the company that owns Perimeter and the school to develop a plan that allows him to return home if needed to support his family.

Last year, Mason was hired as a pilot based in Thompson, Man.

"It's what I've always wanted to do and I'm doing it in, mostly, the communities I wanted to serve."

Mason recently helped develop a program to give aspiring Indigenous pilots in northern Manitoba the chance to train closer to home.

Exchange Income Corporation is in the process of launching the Atik Mason Indigenous Pilot Pathway program. The corporation owns several subsidiaries, including Perimeter. Flight training is to take place in Thompson and members who complete the program are to have a chance to work for one of the corporation's airlines.

Roy Mason said it has been a joy to watch his son open doors for youth.

"I think he always wanted to be a role model and see the youth in First Nations communities be able to realize their goals."

When Mason looks back on his career choices, he thinks about the medicine name an elder gave him. It translates to "Sounds from the Sky."

Aviation has presented him with the full truth of his name, he says.

"Many chapters to come, I'm sure."

This report by The Canadian Press was first published May 23, 2022.