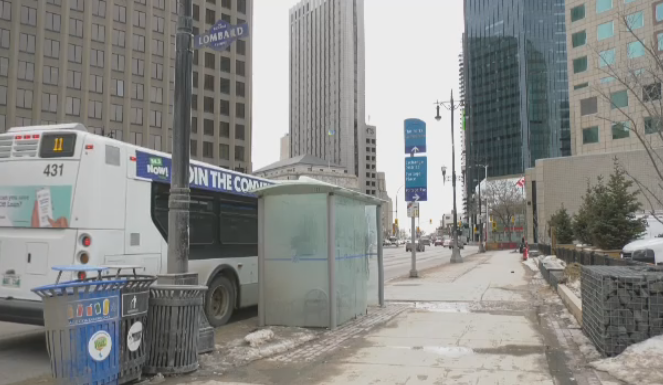 Officers said the assault happened Monday at around 3:30 p.m. in downtown Winnipeg while the 12-year-old girl was waiting for a bus. (CTV News Photo Scott Andersson)
Winnipeg -

A man has been charged after police say a 12-year-old girl was seriously sexually assaulted in a downtown Winnipeg stairwell this week.

The Winnipeg Police Service (WPS) said the assault happened Monday at around 3:30 p.m. Officers said a 12-year-old girl was at a transit shelter at the corner of Portage Avenue and Main Street when a man struck up a conversation with her.

Officers said the man convinced the girl to walk with him. He then took her to a building stairwell off Lombard Avenue and Rorie Street where she was seriously sexually assaulted, officers say.

The victim left and reported the assault to police.

Officials said WPS Auxiliary Force Cadets patrolling downtown on Wednesday afternoon spotted a suspect that matched a description given by the victim.

Uniform officers were called in to help, and a man was arrested.

He has been detained in police custody.