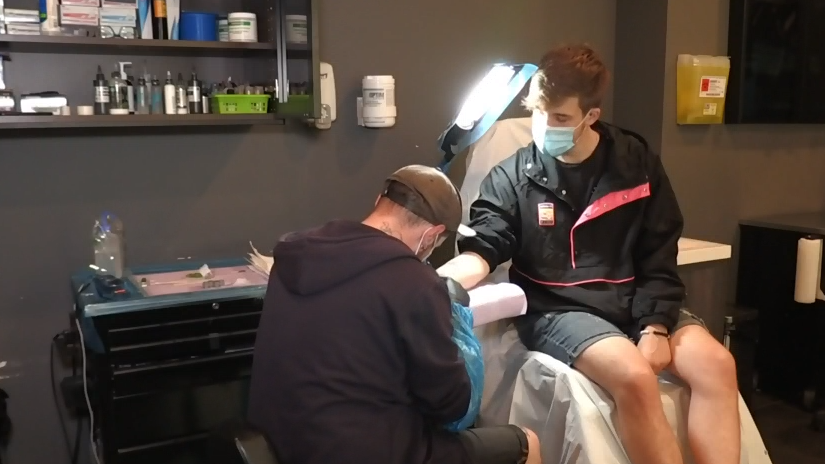 WINNIPEG -- If people are looking to get a fresh tattoo or piercing now that health restrictions have loosened up in the province, they may have to wait.

Tattoo parlours in Manitoba are once again open, but they aren't 100 per cent back to normal.

Nadine Mitchell, who is the owner and operator at Metamorphosis Custom Tattoo and Body Piercing, said the shop has been booked solid since reopening.

"It is incredibly busy – we can't keep up with the phones," said Mitchell.

She added when they reopened the shop, she would stagger the times when people came, and they have not been able to keep up with demand.

"People are really interested in coming back for an experience that they can't get on the Internet."

Phil McLellan, who is the owner of The Parlor Tattoos, has seen a similar situation.

He said they have been extremely busy, but it is mainly because they are playing catch up.

He added even though he is booked much further in advance, it isn't because they are busier, but rather, he is now having to do all the appointments that couldn't happen during the beginning of the pandemic.

"Any new appointments that wanted to book immediately are now being booked for the months of December, January, February, March, April," he added.

Mitchell said despite being open and having customers again, there are still some challenges that they have to adapt to.

"Everybody is here back for work, but the number one thing is wearing masks," she said, "We're trying to figure out how are we going to pierce a tongue…We do as much as we can before we start the marking. When we talk to everybody, we wear masks."

Mitchell also noted that her staff are working shorter shifts because of how long they spend with customers.

"Nobody is pulling six-hour, eight-hour days like we used to," she said. "We feel like we are acclimating – we may be able to get back up to that, but right now we're finding we are doing about four hours-ish for the tattoo artists."

In terms of what tattoos are coming in, both Mitchell and McLellan said there haven't been any COVID themed tattoos yet but McLellan added there is one on the way.

"I have actually booked one for a few months down the road and it is going to include some toilet paper, and some Lysol spray and a mask, that says 'I survived COVID 2020'," said McLellan.