'The city is bleeding money': Councillor raises concerns over launch of BRT amid COVID-19 drop in ridership

WINNIPEG -- Busses began running on Winnipeg’s new BLUE rapid transit line Sunday, but a city councillor is raising concerns about its launch amid the COVID-19 pandemic — which has resulted in a significant hit to ridership.

Waverley West councillor Janice Lukes says she’s concerned about the timing of the launch and its service running at a high frequency.

“The university is closed, transit ridership is down 70 per cent I’m told by the director of transit, and you know the city is bleeding money, it’ going to get really bad,” said Lukes.

The BLUE rapid transit line runs along the Southwest Transitway, to bypass traffic on Pembina Highway, and provides frequent service between Downtown, the University of Manitoba and St. Norbert.

Lukes said she understand the need to ensure proper physical distancing, but says now is not the time to have busses running at high frequency.

“I’m really concerned about the money for the city, the city is going to have a huge problem in the coming months, just keeping essential services going,” she said. 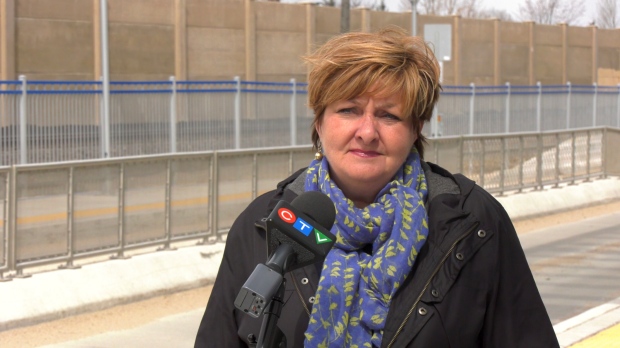 “Financially I just don’t see that we could justify running empty busses up and down the corridor,” said Gillingham.

It also said transit is closely monitoring routes and is looking at possible transit reductions across the city and will cancel scheduled service when needed.

The city also said service levels for its new spring schedule will be adjusted if needed — including on the new BLUE line.

Councillor Matt Allard, chair of the city’s public works committee said the focus has to be on public health.

“I certainly don’t want to be making decisions that are prioritizing finances over public health. I think we don’t want packed buses right now so we need to be very careful with the adjustments we make.”

CTV News spoke with several transit riders Monday to get their thoughts.

Jessica Messel said she uses transit frequently and has never seen the bus this empty.

“I’ve never been on the 16 at this time of day where it wasn’t packed or I’ve even waited for another bus, and I was the only one on the bus today,” said Messel.

Messel, and other riders CTV News spoke with had mixed opinions on the launch of the new BLUE during a time when ridership has taken a big hit.

“I honestly think we have more important things to be worried about than launching a new bus line,” said Messel.

“I think it’s okay, may as well get it up and running to see how it works,” said Tyler Simpson, who said he rides the bus to work every day.

“Why not, let’s experiment to find out exactly what’s going on,” said Paul Miller, who doesn’t drive, and said the bus is his only mode of transportation.