This former Finnish Olympian is coaching with the Winnipeg Jets organization

Venla Hovi is blazing a trail, as one of the first women to be hired as a coach in the Winnipeg Jets organization.

Hovi told CTV News the opportunity “kind of came out of nowhere.”

"Through different connections I started chatting with Dave here at the rink,” she said, referring to head coach and program director of Jets hockey development Dave Cameron. “And it's one of the best things that have ever happened to me."

After a playing career that spanned 27 years and three appearances with Team Finland at the Olympics, Hovi retired in April. But she wasn’t out of the game for long, joining the Jets as a development coach in July.

"Her skill level is undeniable,” said Cameron. “Her playing resume is incredible. But first and foremost she's a really good person. I think that's carried over into her kind of reputation within the community."

The 31-year-old says she hopes to set an example for girls throughout the hockey world.

“It happens more and more, especially now in North America in hockey there's more females involved in hockey, which is great to see. I don't see it as anything out of the ordinary, I don't think it matters who's on the ice with guys or with girls."

Hovi will split time between the Jets, and the as an assistant coach with the Manitoba Bisons’ women’s hockey team this season. 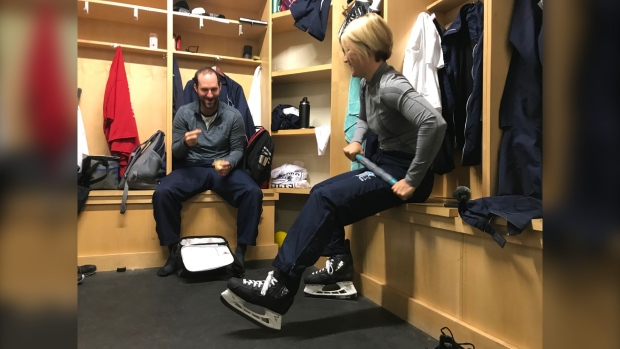 Note: A previous version of this story stated Hovi was the first female coach on the Winnipeg Jets staff. That error has been corrected.