'This is somebody's loved one': Police unable to identify man who died in Winnipeg

'This is somebody's loved one': Police unable to identify man who died in Winnipeg

A young man found in medical distress in Winnipeg more than a month ago has died. Detectives have nearly exhausted their investigation but still don't know who he was, and are turning to the public for help.

The Winnipeg Police Service (WPS) says the young man in his late teens or early 20s was found in the early morning hours of August 5.

Emergency services were called to a well-being check at a McDonald’s restaurant at 1186 Main Street. When they arrived, the man was unresponsive and was taken to hospital in critical condition.

On Thursday, police confirmed the man died. Police do not believe there was any foul play connected, and are not investigating it as a criminal matter.

However, they do not know who the man was.

"It is incredibly important to us that this male gets identified and the loved ones be notified so they can take part in a proper burial," said Const. Jay Murray, a WPS public information officer.

"This is somebody's loved one out there."

Murray said the Chief Medical Examiner’s Office is dealing with a 'John Doe' case here, and will have to make arrangements to bury the body in the near future.

"I don't know if I like the wording – last ditch effort, but that is essentially what this is," Murray said. "We want to ask the public to take this seriously."

He said police released images of the man to the public on Sept. 6, in an effort to identify him. At the time, police already knew the man had died, but made the decision to withhold that information in hopes of being able to identify the family first.

"Unfortunately, we haven't been able to identify his family or the male himself," Murray said.

Police described the man as six feet tall, weighing about 160 pounds, with a thin build and short black hair. He had no tattoos or piercings. He was shirtless when he was found and had no personal belongings with him. He was wearing black pants, and a pair of black and red size 11 US Nike Air Jordan shoes. 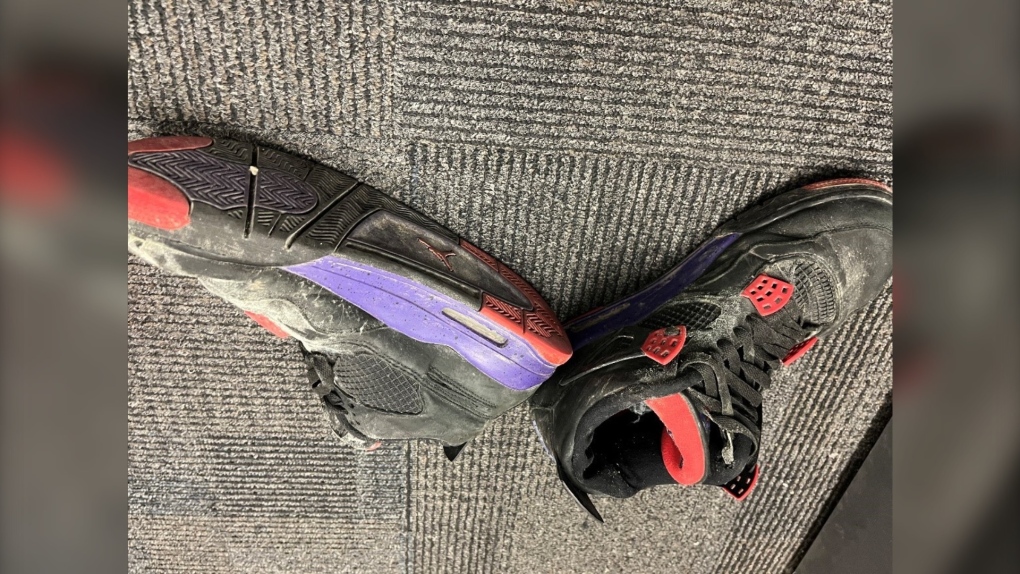 A pair of size 11 US Nike Air Jordan shoes, coloured black with red and purple accents, worn by an unknown man who died in August 2022. (Winnipeg Police handout)

Murray said there is a likelihood the man may have been homeless.

The investigation so far has revealed shortly after 12:30 a.m. on August 5, he got on a bus around McPhillips Street and Mountain Avenue and got off at Main Street and Mountain Avenue. He then walked to the nearby McDonald’s where a concerned passerby saw him. They called police and emergency crews who arrived around 1:25 a.m. Murray said detectives have tried to identify him through missing persons reports and fingerprints – both avenues failed.

"The fact that his fingerprints aren't on not only our local database but a national one as well would indicate this person probably isn't known to any police agency across Canada," Murray said. "The reality is if your loved one has been fingerprinted by police, there is a strong likelihood that this person isn't who it is."

He said investigators have canvassed the area he was found, and have shared the images of the man with CFS agencies, shelters in Winnipeg and other community groups – but it hasn't turned up any leads.

"Somebody will recognize this individual," Murray said. "Somebody out there knows who this person is and we would certainly encourage you to contact us as soon as you can."

Police are asking anyone with information to contact the major crimes unit at 204-986-6219. Murray said it is possible the man was visiting from outside the city, and are also asking people to share the story with friends and family out of town.

Alberta Premier Danielle Smith says her government is crafting changes to be debated next week to reverse the part of a bill that gives her cabinet unfettered power to rewrite laws behind closed doors without legislature approval.

Peel police are searching for a murder suspect who was last seen running away from a Missisauga gas station.

None of the officers who responded to the altercation that led to the death of Const. Shaelyn Yang committed an offence, according to B.C.'s police watchdog.