CLANDEBOYE, MAN. -- The R.M of St. Andrews’ council has stripped the Mayor of key powers and authorities – leaving her as mayor in title only.

Dozens of angry residents flooded into the small St. Andrews municipal office on Monday afternoon to attend a special council meeting. Well over 100 people were in attendance, leaving standing room only, as residents packed in to see what would become of their mayor.

During the meeting, members of council voted to remove Mayor Joy Sul as chair of council meetings and as spokesperson for the municipality, both positions traditionally held by an elected mayor.

“This is unprecedented,” Sul said following the meeting. “This is new to everybody, and it’s not right. There’s an election for a reason.” 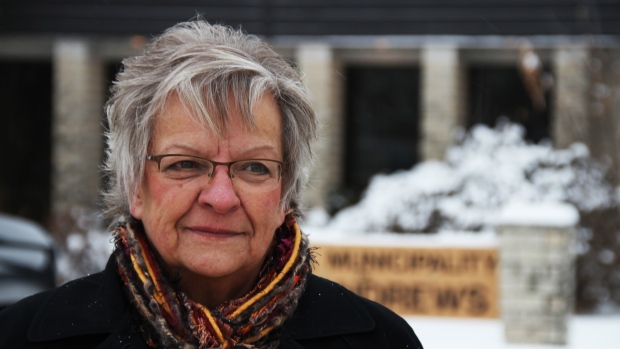 Councillor John Preun was named as new chair and municipal spokesperson in a five-to-two vote. Councillor Hoebee, the only other member on council besides Sul to oppose the changes, was named deputy chairperson.

Hoebee told CTV News Monday night, she plans to respectfully decline the position of deputy chair, and has nominated Coun. Darryl Pohl to take her place. Hoebee said she feels Pohl will be a better fit.

“What I have been concerned about for months now is coming to fruition today – the methodical changing of the by-laws to strip the mayor of her duties,” said Coun. Kristin Hoebee.

“It is not about what you want to do as councillors, but what we were elected to do together, and run this R.M. with dignity and honour. What has been happening in the past few months, in my opinion, lack both those qualities.”

Following the vote Sul said she was not sure exactly what powers were removed from her, but would be speaking with her lawyer in the days to come.

As to why the council felt the mayor’s authority had to be removed, Deputy Mayor Preun said this was a decision the majority of council felt had to happen for the R.M. to move forward.

“It’s a tough thing to do, and we lamented over it for a long time, but after numerous attempts to try and make her a better leader and a better person – it wasn’t working out for us,” Preun said following the meeting.

“It was a very combative atmosphere, very antagonistic. And there is not one person who is not responsible for it. We all were responsible for it, but as leader of the group, she couldn’t steer us back on the right path.”

Preun said the mayor is still mayor and will still have a vote on council, but he said she is very similar to a councillor now.

The move comes after months of tension within council.

Sul told CTV News months after she was elected mayor in a landslide victory, gaining over 61 per cent of the vote, she began to feel a coup was in the works from the male members of council.

“I feel there is some discrimination going on,” Sul said. “To be honest I think it’s egos, big egos.”

Coun. Hoebee said in the past months there has been a division between the men and women on council when it comes to voting.

Councillor Darryl Pohl said there is no doubt there are issues within council.

“The environment of these meetings of council over the past year has been extremely disrespectful, demeaning, promoting bullying, and out of control,” said Pohl, adding the allegations of gender discriminations are completely inaccurate.

“We base decisions on logic. We have discussions and we work through things that way. Nothing is based on any kind of gender discrimination.”

COUNCIL DECISIONS HAVE SET A PRECEDENT IN MANITOBA

Sul’s lawyer, Norman Bodreau attended the meeting and said the decisions made have set a precedent in Manitoba.

“It certainly doesn't look good for the democracy and in the future in Manitoba,” Boudreau told CTV News. “If this is allowed to happen and there is no judicial review of this resolution, then the democracy will continue to be eroded.”

He said because of this decision, electors who vote a person in as mayor cannot be certain that individual will remain as their leader.

The council said it would be releasing an official statement in the coming days.