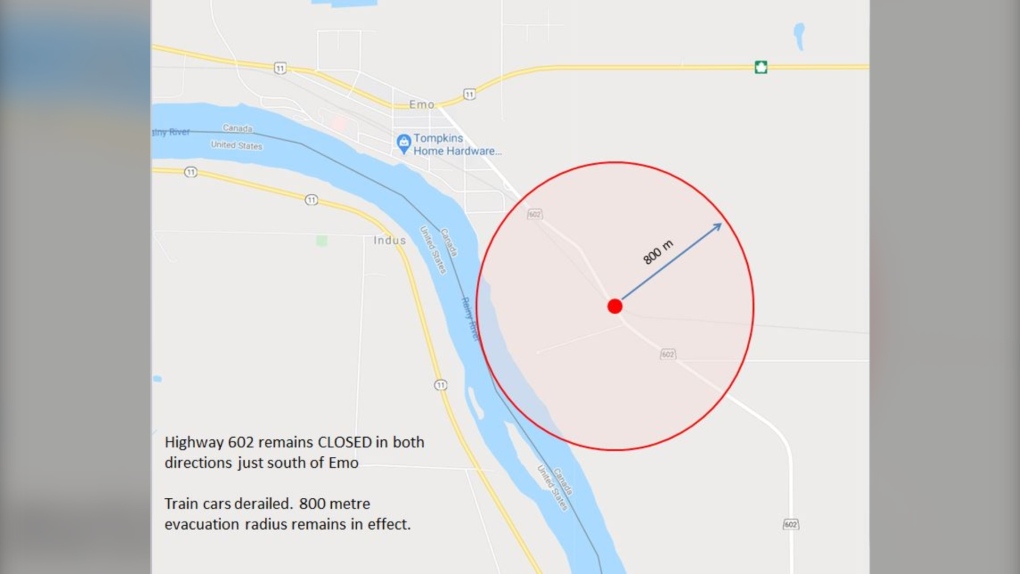 WINNIPEG -- A train derailment in northwestern Ontario has forced evacuations in the area.

CN said around 8:30 p.m. local time Tuesday, one of its trains derailed along Highway 602 just south of Emo, Ont. It said the train is blocking a crossing.

Ontario Provincial Police said homes within 800 metres of the derailment were evacuated as a precaution.

On Wednesday afternoon, OPP said there is no risk to public safety, and residents were allowed to return to their homes.

Highway 602 remains completely closed to traffic. OPP said drivers should take alternate routes and use Highway 613 to access nearby areas. Police do not know when the highway will re-open.

Approximately 30 railcars were involved in the derailment, said CN, and several are leaking crude oil. It said preliminary reports show no product has entered area waterways.

Local emergency responders and provincial authorities are on site, along with CN crews. No injuries have been reported.

As of approximately 4 a.m. local time, police said Highway 602 remained closed in both directions, and the evacuation is still in effect.

The cause of the derailment is under investigation.

The Transportation Safety Board said it is sending an investigator to the site of the derailment, who will gather information and assess the situation.

Emo is located about 180 kilometres southeast of Kenora, and is directly north of Minnesota.