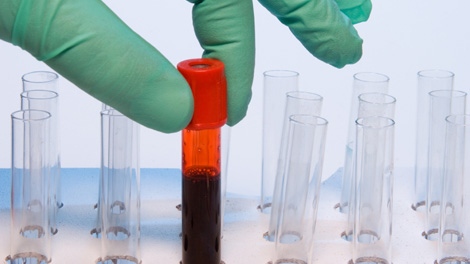 A blood sample is shown in this file photo.

WINNIPEG -- Retirements, resignations, and maternity leaves have prompted Shared Health to consolidate diagnostic services in the Roblin and Russell area.

A spokesperson for Shared Health told CTV News, effective September 1 diagnostic services in the area will be temporarily consolidated at the Russell Health Centre due to staff vacancies.

The spokesperson said these vacancies were caused by retirements, resignations, and maternity leaves. They said recruitment to fill these positions is ongoing.

The spokesperson said the consolidation of diagnostics in Russell will keep predictable and reliable services in the wider geographic area.

"Temporary service interruptions caused by staff vacancies are regrettably not a new phenomenon for people living in rural Manitoba and, specifically, Roblin," the spokesperson said. "Every effort is being made to maintain as much service as possible while the recruitment process is underway."

They said ECG exams and phlebotomy, including lab sample collection and blood samples, will still be available with testing occurring off-site.

Bob Moroz, the president of the Manitoba Association of Health Care Professionals (MAHCP), the union representing employees at the Roblin and Russell hospitals, said it is sad to see another community lose diagnostic services, adding it was avoidable.

"This closure is the direct result of a failure to invest in rural health care," he said in a written statement. "It’s the culmination of a failed strategy to ignore and cut, and now their answer is to cut even more services."

Moroz said he is worried the temporary closure could become permanent, which would affect the workers living in the community.

"We are concerned that this closure in Roblin could be part of a concerning trend and that many more closures and cuts to services may follow. Not only does this mean a loss of services, but a loss of good jobs as well," he said.

He called on the province to get back to the bargaining table to negotiate a fair deal.