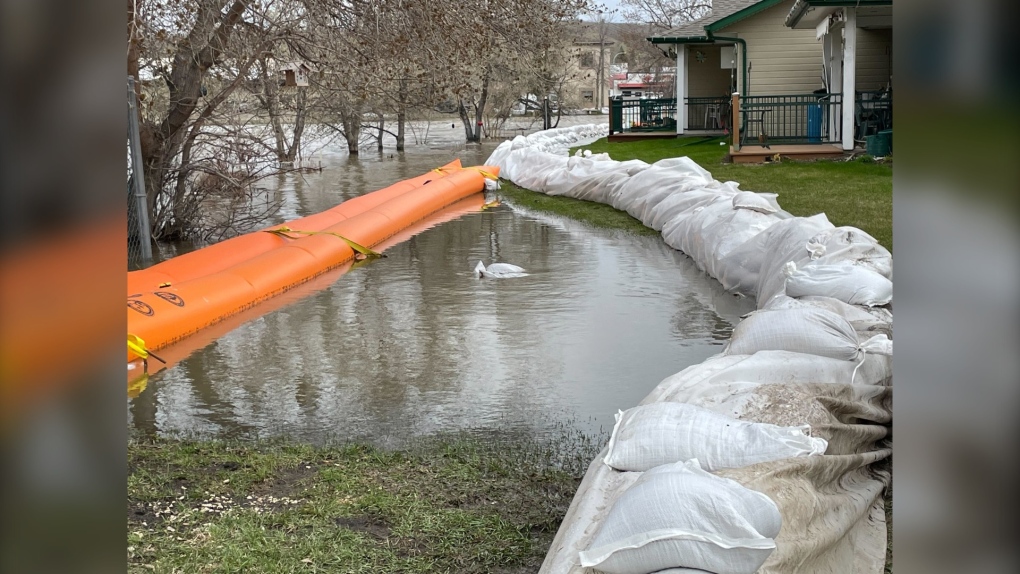 The Town of Minnedosa has declared a state of local emergency due to flooding. (CTV News Photo Cody Carter)
Winnipeg -

Water levels are trending down in the Minnedosa area according to an update Thursday from the Minnedosa Minto-Odanah Emergency Measures Committee.

Water levels in the lake northeast of the town dropped by 7 centimetres overnight Wednesday. The news release also stated there was a, “noticeable drop,” in river water levels.

Officials are tempering their optimism, however, as Environment and Climate Change Canada has issued a Rainfall Warning as of 10 a.m. Thursday for the area west of Lake Manitoba, extending north into Riding Mountain National Park. The warning includes the town of Minnedosa, and the surrounding Rural Municipality of Minto-Odanah.

Areas covered by the warning are advised to expect 30 to 40 mm of rain by Friday morning.

In Minnedosa, crews will continue to reinforce areas of concern along the dike system and will continue to pump water to reclaim flooded areas. The news release said the town had scheduled a consultation with provincial officials on removing more logs to boost stream flow temporarily. Another purpose of the meeting was to develop a plan to cope with more water should forecasted rain materialize.

On Tuesday, Minnedosa officials declared a local state of emergency, and in response to rising water, several local schools switched to remote learning.

Volunteer crews have assisted with sandbagging in key areas, and more are required for operations planned for Thursday.

“I can’t tell you how many volunteers that have come out in all the five areas, it’s been an amazing turnout,” says Councillor Grant Butler, who himself was at the forefront of sandbagging efforts in various parts of the town.

On Thursday, a spokesperson at the Emergency Operations Centre said there had been a few voluntary evacuations from properties in the area, but that no mandatory evacuation orders had been issued.

With files from CTV’s Cody Carter

U.K. Prime Minister Boris Johnson has agreed to resign, his office said Thursday, ending an unprecedented political crisis over his future that has paralyzed Britain's government.

Here's who could replace Boris Johnson as U.K. prime minister

Boris Johnson was due to resign as Britain's prime minister on Thursday, bringing an end to a turbulent two and half years in office and triggering a search for a new leader.

The next stage in the battle against COVID-19: bivalent vaccines

Several vaccine manufacturers are racing to develop formulas that take into account the more infectious Omicron variant now driving cases, while policymakers are laying the groundwork for another large-scale vaccine blitz.

A well-known Ukrainian paramedic who was held prisoner by Russian and separatist forces for three months after being captured in the southeastern city of Mariupol has accused her guards of psychological and physical torture during her time in captivity.

Brittney Griner trial in Russia resumes amid calls for U.S. to strike deal

Jailed American basketball star Brittney Griner returns to a Russian court on Thursday amid a growing chorus of calls for Washington to do more to secure her release nearly five months after she was arrested on drug charges.