'We could not survive another lockdown': Manitoba restaurants hoping third wave of pandemic doesn't occur 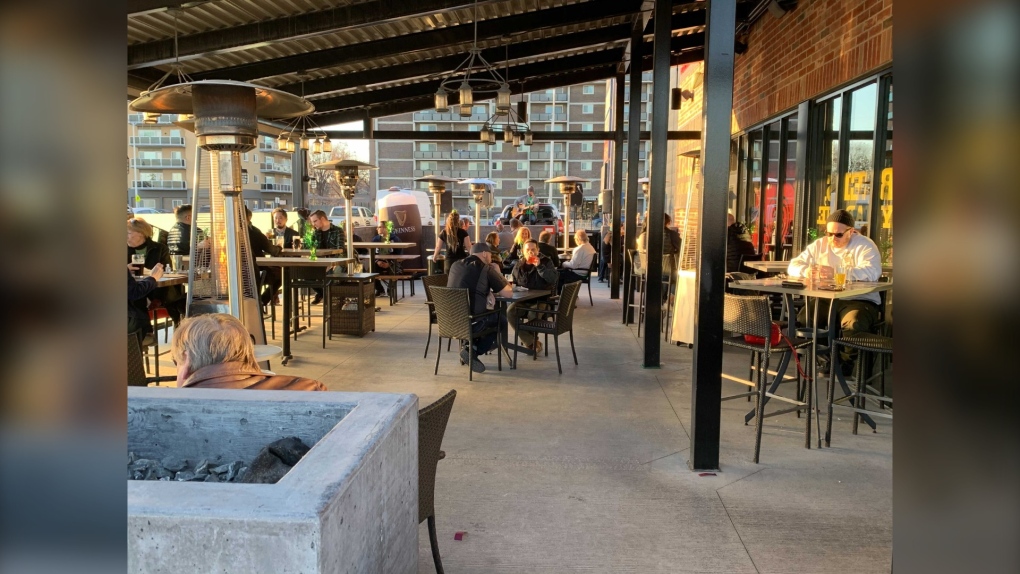 Winnipeggers sit on the patio at Fionn MacCool's Grant Park on March 17, 2021. Restaurant owners in Manitoba are hoping eased restrictions for restaurants will be coming in the next set of public health orders, but are also worried about a third wave of the COVID-19 pandemic. (CTV News Photo Scott Andersson)

WINNIPEG -- Winnipeg restaurants and bars enjoyed a busy Wednesday thanks to Saint Patrick’s Day, including Bar Italia on Corydon Avenue.

“We had a great night. It was a beautiful day, a beautiful evening. People just came out and enjoyed themselves,” said Rhea Collison, general manager for Bar Italia.

That rule could soon extend to indoor dining, as the province suggested Thursday restrictions could be loosened to allow households and their designated household visitors to eat inside restaurants together.

Collison is hoping Manitoba’s COVID-19 trajectory stays on course and worries from some experts, including Canada’s chief public health officer, of a third wave brought on by more infectious variants of the virus, don’t come to fruition.

“We’d get through it, as we would have to and as much as we could,” said Collison. “Hopefully, that won’t happen.”

Concerns over a third COVID-19 lockdown come as variant cases of the virus are on the rise in Manitoba. Twelve new variant of concern cases were announced Thursday.

“A third lockdown in our industry would be business destroying,” said Jeffrey. “We could not survive another lockdown.”

Jeffrey says he’s also concerned about the province’s contact tracing efforts amid the spike in variant cases after some Winnipeg restaurants were publicly listed as exposure sites recently.

“When businesses are recognized as potential exposure areas, it puts a monumental stress on the business,” said Jeffrey.

Allowing households to eat inside with their designated visitors is good news, Jeffrey added.

Not all restaurant owners say the same.

“I own a dining room, but I don’t think it’s safe for people from other households to come together right now,” said Tonelete.

Roughage Eatery’s indoor dining room has been closed for most of the pandemic. The restaurant has only been serving takeout orders.

Business has been a bit slow, says Tonelete, particularly as more have restaurants have reopened their dining spaces. However, she says, opening up the province too soon could backfire.

“I am not hopeful, I think that’s detrimental,” said Tonelete. “If you do that, more cases are going to happen again and we’re going to have a third lockdown.”