Why are there hay bales at two Winnipeg parks?

Why are there hay bales at two Winnipeg parks? 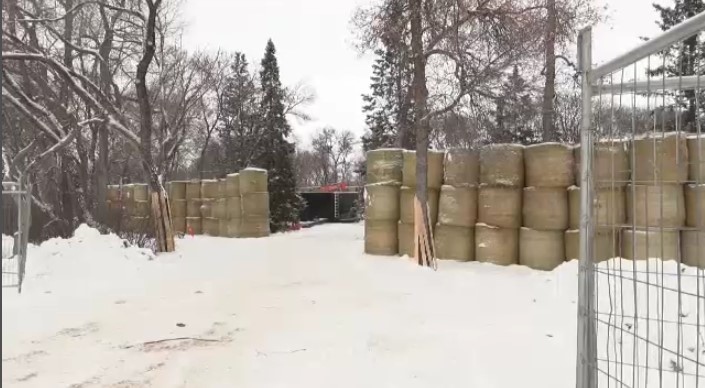 Bales of hay can be seen in two Winnipeg parks.

Those who are passing by Kildonan and Fraser’s Grove Parks might notice something unusual – hay bales.

The hay bales are being used at these parks to help minimize the sound during a sewer repair project, which has crews replacing an existing sewer that crosses the Red River.

The bales have been stacked to create walls that are about five metres in height.

The City of Winnipeg said using a sound reduction tactic for this type of project is a new initiative, and that the decision was made based on the initiative’s proximity to homes and the necessity to work 24 hours a day. It noted the project’s contract required noise attenuation, but it was up to the contractor to determine the method.

The city noted that research shows that hay bales are effective when it comes to sound control.

The hay bales, which were supplied by the contractor, are expected to be around for the next few weeks.

Kildonan Park and Fraser’s Grove Park will remain open during the project.