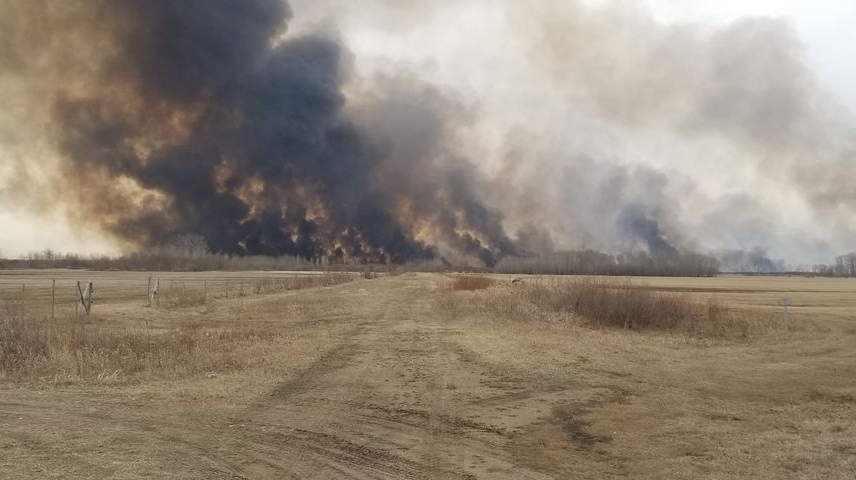 A wildfire estimated to be about 400 acres large is burning near Zhoda, Manitoba, on April 5, 2021. (Submitted: Bert Baumgartner)

WINNIPEG -- Fire crews in southern Manitoba are working to extinguish a wildfire estimated to be about 400 acres in size.

Stuartburn Fire Chief Bob Fosty told CTV News the fire was reported around 2:30 p.m. on Monday. It is burning roughly seven kilometres southwest of Zhoda -- though Fosty said its origins are unclear at this time.

While fire crews do not yet have the fire under control as it spreads out towards the east and west, Fosty said there have been no evacuations required.

"There has been no injuries or loss of life or loss of property, but we are working at it to extinguish both the east and the west edge of it."

Fosty said the fire has burned down to the Rat River, and while it hasn’t jumped the river, it is still spreading. He noted the wind and terrain have been two of the biggest challenges so far.

“Where it started is swamplands, so we can’t even walk in there. It’s burning cattails,” said Fosty. “Even though there’s water in there, it’s burning across.”

He said there is no estimated time for when they will have the fire extinguished.

"It depends on our efforts, how much work we will be able to get done tonight and depends on the weather and the wind," he said. "If it switches then it is a whole new ball game, so we really don't know at this point."

Fosty asked residents to stay home and let the fire crews do their work.