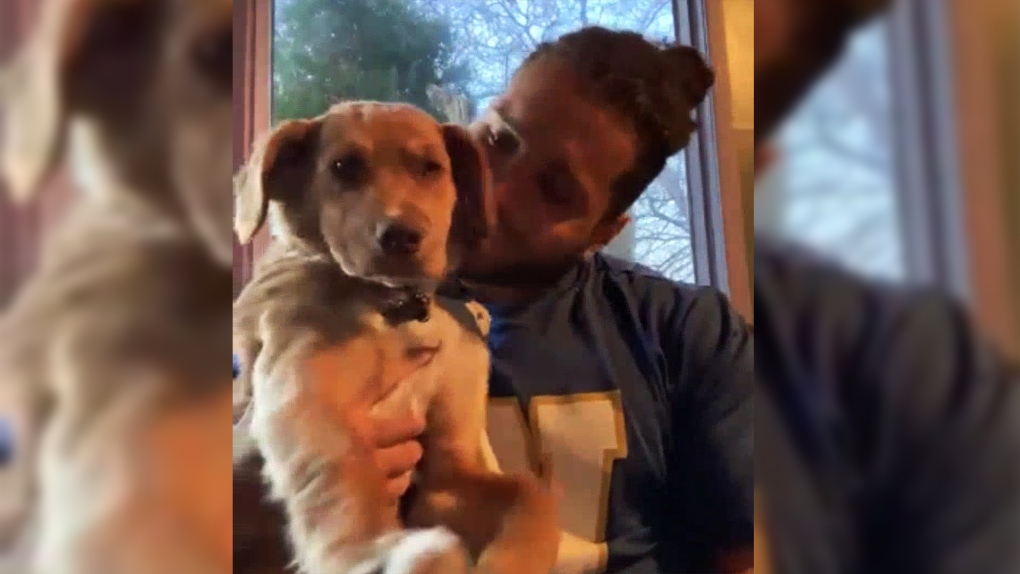 WINNIPEG -- Winnipeg Blue Bomber and Grey Cup champion Brady Oliveira's afternoon in the dog park took an unexpected turn after lending a helping hand to a woman whose dog went for a swim in the river.

Oliveira told CTV News that he had been walking his puppy in the Maple Grove Dog Park in St. Vital on Tuesday afternoon when he noticed the woman getting her dog out of the river.

"It was just natural instincts for me to go over there and to help them," said Oliveira.

The woman, Ashley Bourgeois, told CTV News her dog climbed down the bank and went for a dip in the river.

She said she was proud of her dog – who is almost 11-years-old and has arthritis – for climbing down and going swimming.

"I noticed when he was trying to go against the current – the water is pretty strong right now – I noticed he was struggling," said Bourgeois. "The riverbank is really steep in that spot and he couldn't get out."

She said Oliveira was there to help, and together the two of them were able to get her dog out of the water and up the river bank.

"It was definitely not the afternoon I was expecting," Oliveira said. "But I am so, so, so happy that I was there at that time."

Bourgeois said she was thankful, even during the COVID-19 pandemic that someone would stop to help.

"I do think what is special about this city is that we do help each other out," she said.

Oliveira said when they were back on dry land despite his Grey Cup Championship hoodie he was wearing at the time; she didn't recognize him as a Blue Bomber.

"I'm just a huge dog-lover and I spend a lot of time in that Maple Grove Dog Park," he said.

Oliveira said he works with a dog rescue organization called K9 Advocates, which rescues dogs in communities across Manitoba. He said in his off-season he has worked with the organization to rescue about 50 dogs, including his own puppy Nellie.

Bourgeois said both her dogs are rescues, and she said even during the pandemic it is important for people to help out.

"Check in with your local rescues and see what you can do to donate or support them in any way shape or form," Bourgeois said. "I do know rescues are struggling right now and if people can't donate money, they can donate food."

With the Blue Bombers' season still up in the air due to the COVID-19 pandemic, Oliveira said he still stays in contact with the rest of the team and is looking forward to when they can get back on the field.

"Right now all we can do is be optimistic. I'm training like there will still be a season coming," he said. "

"For me, my goal is still set for all the things I want to achieve this year with the Winnipeg Blue Bombers."

As of early April, the CFL announced the season would not start until at least the start of July.

EDITOR'S NOTE: This story has been updated with comments from Ashley Bourgeois. The story has been revised to reflect that Bourgeois did not fall into the water, but did receive Brady Oliveira's help to get the dog out of the water.