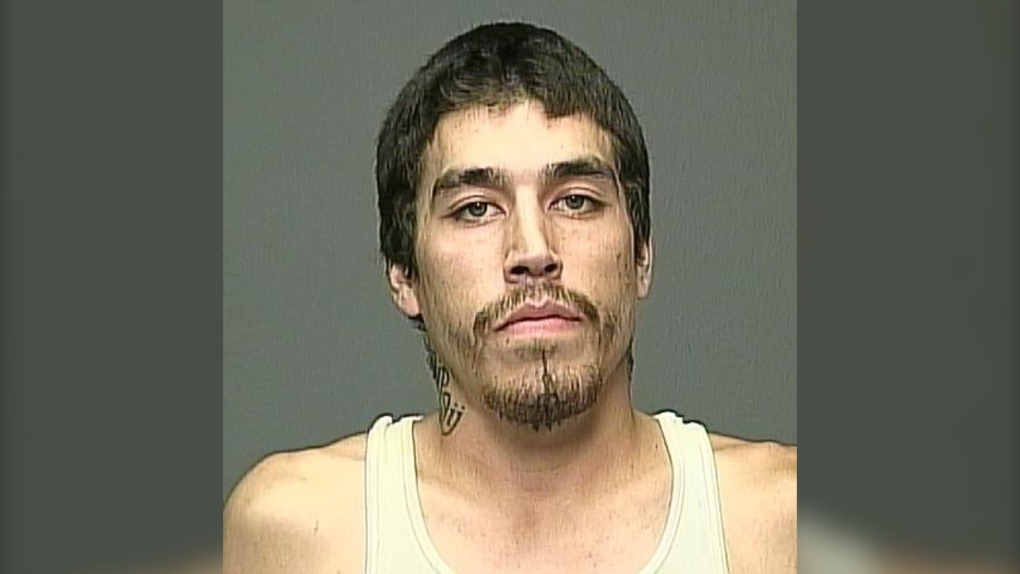 Jordan Andrew Bruyere of Winnipeg has been sentenced to 14 years in prison for sexual interference, invitation to sexual touching, and sexual assault. (Image source: RCMP)
WINNIPEG -

A man who pleaded guilty to assaulting three women and a teenage girl around Winnipeg's river trail system last year has been sentenced to 14 years in prison.

Jordan Andrew Bruyere, 30, was sentenced in Manitoba Provincial Court on Monday by Judge Robin Finlayson to 14 years in prison, minus the time he's already spent.

Finlayson noted Bruyere's remorse and willingness not to have a trial where the victims would have to testify weighed in the decision.

Bruyere admitted to attacking a woman in her 30s on the outskirts of Downtown Winnipeg on April 8, 2021. The court heard Bruyere pulled the woman down from behind while holding a knife before she was able to scream and run away.

The second incident occurred two months later when a woman in her 20s allegedly asked Bruyere to borrow his cell phone. Bruyere noted there was better reception under the Donald Street Bridge, where he then dragged her down to the river bank, threatened her with a knife and raped her.

The court heard that Bruyere attacked another woman in her 20s who was jogging on the river trail along Churchill Drive eight days later. She was pulled to the ground but managed to escape.

The last incident Bruyere admitted to happened on Aug. 8, 2021, when a 15-year-old girl was walking on the trail near Churchill High School. Bruyere apparently approached her and began talking to her before he sexually assaulted her. She was able to escape and run away to a nearby group of firefighters.

A HISTORY OF ABUSE

The Crown and Bruyere's defence attorney, Laura Robinson, came together to agree that 14 years behind bars, minus time already spent, was a fair sentence due to Bruyere's tough upbringing.

The court heard Bruyere was abused as a teenager, but due to a publication ban, the specifics about the incident, including the name of the perpetrator, cannot be reported.

The lawyers detailed how Bruyere was abused growing up and battled an addiction to drugs that "exacerbated his PTSD."

Robinson said Bruyere recognizes he is a risk to the public and regrets what he did. She said Bruyere pled guilty to ensure the process was as quick and easy as possible for the victims.

"It can be so, so hard," said Finlayson during his final remarks. "I consider that a true demonstration of remorse."

Two of the victims wrote impact statements for the judge to read privately.

Bruyere will now serve around 12 years in prison since he's spent a little more than a year in jail after he turned himself in. He will also be added to the child abuse registry.

Once his sentence is over, Bruyere will not be allowed near playgrounds, schools, parks, or other places children might be. He is also not allowed to own any weapons for the rest of his life or contact any of the victims.

Canadian military would be 'challenged' to launch a large scale operation: Chief of the Defence Staff

Canada’s military forces are “ready” to meet their commitments should Russia’s war in Ukraine spread to NATO countries, but it would be a “challenge” to launch a larger scale operation in the long term, with ongoing personnel and equipment shortages, according to Chief of the Defence Staff, Gen. Wayne Eyre.

Canada is importing more children’s medication amid an unprecedented surge in demand, but the head of the Ontario Pharmacists’ Association warns that the supply will still need to be rationed if it’s going to last.

Lionel Messi’s Argentina face a crucial encounter against Mexico after Kylian Mbappe starred in France's win over Denmark. Australia and Poland both stayed alive in the competition with wins.

Fleeing shelling, civilians on Saturday streamed out of the southern Ukrainian city whose recapture they had celebrated just weeks earlier as the country remembered a Stalin-era famine and sought to ensure that Russia's war in Ukraine doesn't deprive others worldwide of its vital food exports.