Winnipeg Scrabble Club a community of competitive, word-lovers seeking their next highest score

WINNIPEG -- On Thursday nights, a distinct sound can be heard through the halls of Canadian Mennonite University. It's the collective, hushed noise of Scrabble tiles being shuffled around in cloth bags, picked out one-by-one and arranged neatly on racks by word-loving Winnipeggers.

This is the gentle but constant soundtrack that has scored the Winnipeg Scrabble Club through many iterations and venues for over 20 years.

"I've always said, there's no such thing as a bad game of Scrabble,” explained Julie Kading, a co-director and founding member of the club.

Kading initially heard about the club in 1997. Back then, a few casual Scrabble fans were planning to meet in a cafe to play.

“I always liked it, but I never had anyone to play with,” Kading explained. “And then one day my husband heard that somebody was trying to organize a group of players, and he told me about it, and I went and explored it. That's when I started playing seriously."

Since then, the club has bounced around to a few different venues, with members coming and going.

Today, the club runs on a simple format. Members pay a $5 fee that buys them as many games as they can play over the weekly, three an a half hour meeting. Additionally, they hold an annual tournament, kind of like the Stanley Cup of Scrabble, but the prize is pride and not a trophy.

However, even the weekly meetings are quietly competitive, with members driven by double and triple word scores, and the pursuit of the ever-elusive Bingo, a word that uses all seven of a player's tiles.

Aside from a game of words, Winnipeg Scrabble Club members say it's also a game of strategy and math. Memorizing two-letter words doesn't hurt, either.

“That's a good first step,” explained Linda Pearn, one of the club's co-directors. 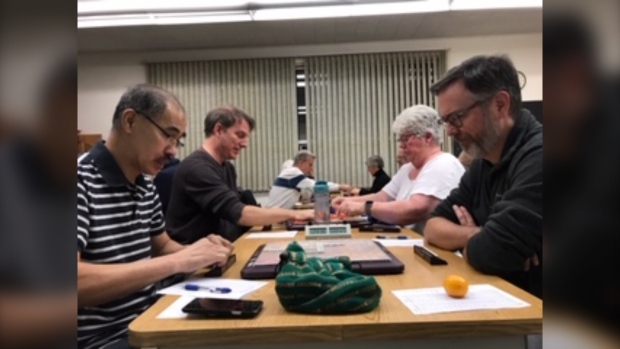 But aside from the basic strategies, everyone has their own tactics.

"There's a lot of strategy in not giving away good board position to your opponent,” explained club co-director Colin Viebrock. “You want to avoid giving openings for your opponent, but you also want to find ways to open up the board for yourself if you're losing.”

“I put the vowels first in alphabetical order, then the consonants,” said Pearn of her strategy. “At the end of that, I leave out the S's and the five big letters, which are J,K,Q,X and Z, and the blanks go at the end.”

While hundreds of rounds have come and gone for members of the Winnipeg Scrabble Club, memories of high-scoring words remain. Pearn recalled fondly earning 149 points by playing a triple triple, which means a word that covers two triple word score tiles.

“That one I do remember,” she said.

“It was the word 'marquis' across a trip triple, and that was 285 points.”

Similarly, Viebrock scored his personal best with the word 'marquis'.

“I think it was a 149 point word. Yours was higher,” he said to Kading, laughing.

Currently, the club is looking to double and triple their membership along with their words.

"It's hard to attract people,” explained Kading. “It seems like mostly retired people have the time and the luxury to play on a regular basis. Mostly grey hairs, like us."

The club does offer some help to new, green members, like word charts and some sympathetic competition.

“People are pretty good about not playing too hard with newcomers,” Viebrcok said.

But no matter what level you start at, organizers have a message for those who think they won't stack up against the competition.

“Be patient. You'll get there, and have fun. That's my number one thing. It's a fun thing to do,” Pearn said.