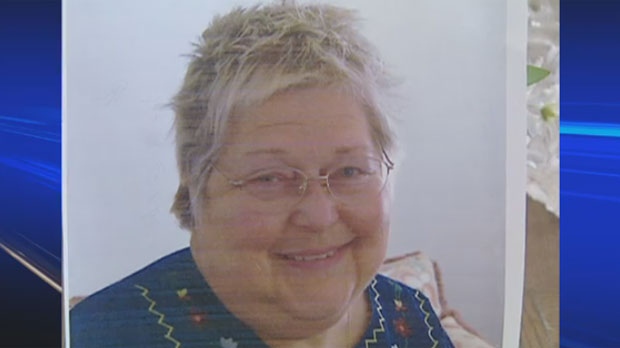 Heather Brenan, 68, died in Winnipeg in January 2012. An inquest has been called into her death. (file image)

WINNIPEG -- A woman whose mother died after being sent home in a cab from a Winnipeg hospital -- only to collapse on her doorstep -- is hoping an upcoming inquest will force hospitals to standardize their discharge policy so vulnerable people aren't sent home alone at night.

Dana Brenan's mother, Heather, died a year ago from a blood clot that had travelled to her lungs. A standing hearing for the inquest into the 68-year-old's death was held Monday but it could be months before the inquest begins hearing testimony.

The inquest comes as the Winnipeg Regional Health Authority is investigating at least two similar cases in which two other people were sent home from hospital in taxis and died on their doorsteps in the dead of winter.

"Clearly they haven't changed anything despite assuring the public that they have. That's what this inquest is about," Brenan said. "Clearly there is something wrong with the health-care system in this city, in the province. Those problems need to be identified and (find) a way to correct them so that elderly, vulnerable patients are not being sent home late at night on their own."

Manitoba's chief medical examiner called the inquest last February to figure out the circumstances of Brenan's death and "examine hospital policy regarding the discharge of patients at night, particularly those who are elderly, frail, and who reside alone."

The inquest is also charged with investigating whether a shortage of acute care beds in the hospital might have been a factor in her death.

The health authority updated its discharge guidelines following Brenan's death but her daughter said there are still gaps.

"A unified set of standards would be nice," she said. "It's really shocking to discover that even people working in the same department were not using the same criteria to assess patients. It was all up to individual decision-making.

"There are clearly problems. But there are really logical, easy fixes."

Arlene Wilgosh, CEO of the health authority, has said they are concerned about such cases and are "looking to improve our processes so that we can continue to ensure the safety of our patients." But she said an internal audit called in the wake of Brenan's death found this wasn't a systemic problem.

A lawyer for the health authority refused to comment about the case or the upcoming inquest because the "matter is before the courts."

The health authority, a lawyer for the doctor who discharged Heather Brenan, her daughter and a lawyer representing the union of health-care workers were all granted standing at a hearing Monday. No dates for the inquest were set.

Miles Pollock will be following the inquest closely. His uncle, David Silver, was found frozen on his doorstep about 14 hours after he had been sent home in a cab from hospital in the middle of the night.

His death was apparently due to a heart condition that hadn't been diagnosed at the hospital.

Pollock said he's skeptical senior health officials and politicians are interested in making the kind of changes that are needed. Although the health authority has publicly apologized for Silver's death, Pollock said no one has ever contacted his family to apologize personally.

"I hope the proceedings that are going on ... have a result that engenders some kind of change because it's clearly needed," he said.

While Pollock said he can understand that a hospital may have needed the bed, he said it's hard to understand how someone could have thought it was OK to discharge an elderly man in the middle of the night when temperatures dipped down well below -20C.

"It still boggles my mind when I think about what they did to my uncle that night," Pollock said. "Those things, they don't need to happen."