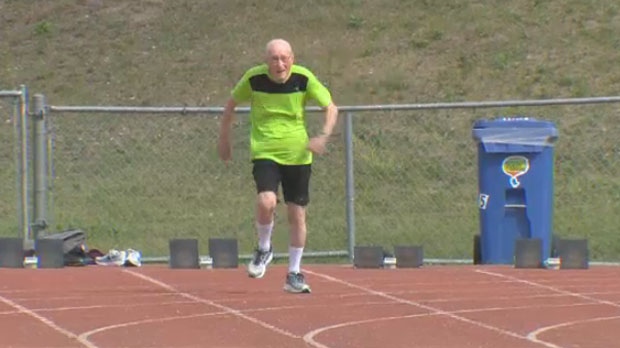 Six years of training has paid off for 95-year-old Lou Billinkoff who successfully broke a Canadian sprinting record on Saturday morning.

He took to the track at the University of Manitoba to take a shot at the 100 metres sprint for the 95 and up age category and shattered the previous record of one minute and 18 seconds.

Billinkoff made it look easy crossing the finish line in just over 29 seconds, a few seconds short of his personal best. The 95-year-old said the record was ‘quite easy’ to break, and he now has his eyes set on the world record.

Nearly a hundred people showed up and watched Billinkoff run. Following the race, spectators approached Billinkoff congratulating him on the record and calling him an inspiration.

“If I can put a smile on people’s face, I feel great. I want to make people happy,” said Billinkoff of his newly found adoration.

Billinkoff started his running career at 89, after suffering a heart attack in hopes of improving his cardiac health.

“The first time I ran, I only ran forty metres, but I enjoyed it. I keep getting better at it and I just ran for the joy of it.”

Billinkoff hopes to spread awareness about the importance of trying new things.

“I want to encourage anybody of any age to be active, because sometimes they could do something that they never believed they could do.”