At least 1 dead, another injured in Brandon, Man. house explosion

WINNIPEG -- Police said a 63-year-old woman is dead and a 63-year-old man has been airlifted to hospital after a house explosion in Brandon, Man. on Tuesday night.

Police said the explosion happened at around 7:50 p.m. in the 200 block of Queen’s Avenue East.

Authorities said a strong smell of gas was present following the explosion, but the cause of the blast is under investigation by police and the Office of the Fire Commissioner.

The man who survived the blast was in critical condition and transferred to a Winnipeg hospital, police said.

A neighbour who was outside working on his truck at the time said he felt the explosion before he heard anything.

“I felt, felt a blast, but I didn’t hear anything,” said Stephen Taillieu, who lives nearby. “And then a second or so later I heard a bit of a blast.”

Taillieu said he thought the explosion sounded far away, but quickly learned he was wrong.

“Next thing you know, all the neighbours are coming out of the houses. Everybody felt the blast in their house, our of their house, and was running up the street.”

The street was blocked off for the investigation and students of Green Acres School were told to take an alternate route to get there Wednesday morning.

Nearby homes were also evacuated following the explosion, but people were allowed to return home overnight.

-With files from CTV's Stephanie Tsicos and Tim Salzen 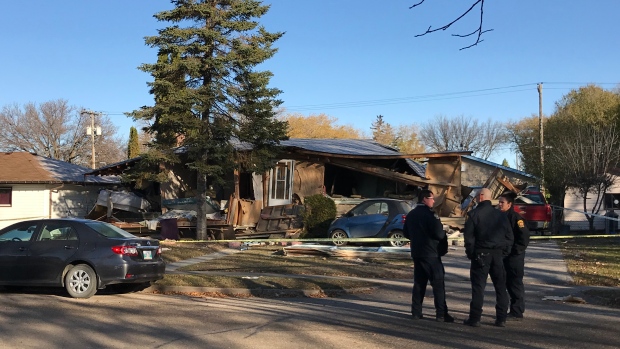