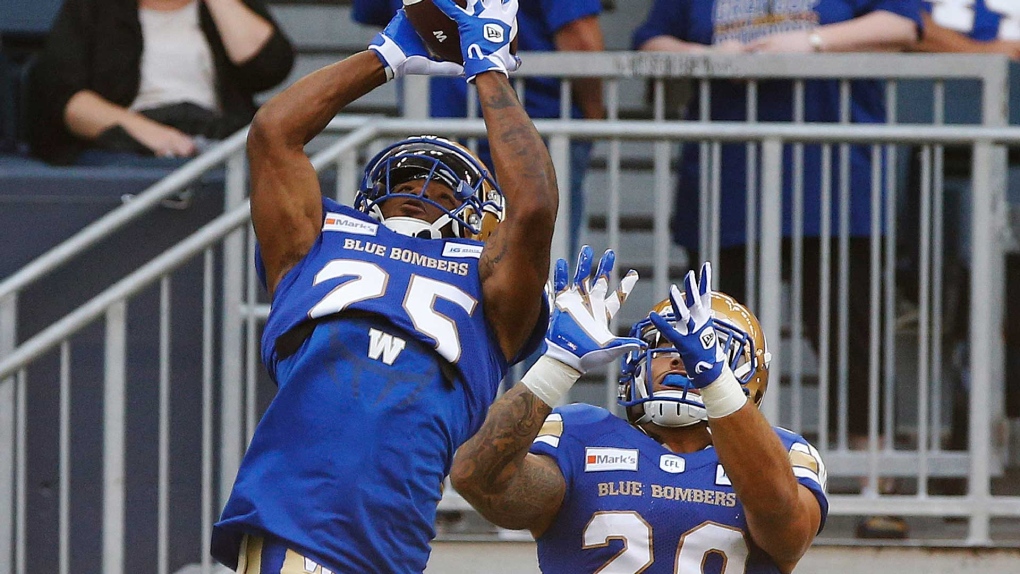 Winnipeg Blue Bombers' Josh Miller (25) and Brady Oliveira (20) go up for the pass during a warmup prior to their CFL game against the Hamilton Tiger-Cats in Winnipeg Thursday, August 5, 2021. THE CANADIAN PRESS/John Woods
WINNIPEG -

The CFL West Division Final is a day away, and the Winnipeg Blue Bombers could unleash a three-headed monster at running back on the Saskatchewan Roughriders’ defense.

Brady Oliveira, Johnny Augustine and Andrew Harris all topped 100 yards in games this season, and if Harris is healthy on Sunday, the Bombers could cycle through all three backs, using three different running styles against Saskatchewan.

“They’re here for a reason, we believe we can win football games with these guys carrying the bulk of the load,” said O’Shea about his tailbacks.

“We’re in a good spot that way. We’ve talked about depth before, we like our depth at that position, it’s pretty damn good.”

Harris was the most outstanding player at the 2019 Grey Cup, but he’s missed seven games this season due to injury.

Oliveira and Augustine have combined for over 700 rushing yards in his absence.

“It would be something pretty exciting if all three of us could somehow get touches,” said Oliveira.

“You know, we’re all Canadian, that’s something special. But I do think that system works.”

Kickoff for the West Division Final is at 3p.m. CT.