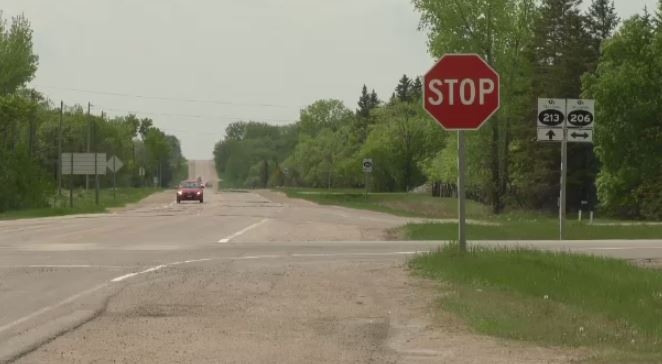 WINNIPEG -- An Oakbank, Man., man who narrowly survived a collision at the intersection of PR 206 and Garven Road in May wants the province to take immediate action following a fatal crash at the same intersection on Oct. 22.

“We need to get something done immediately, because this is going to happen again,” said Dan Wischnewski, who was left with two broken hips, bleeding around his brain and a lengthy stint in rehab after a driver drove through a stop sign at the intersection last spring.

Since the crash on May 8, the province has implemented a number of safety precautions at the corner including rumble strips, flashing lights on the stop signs and flags on the stop-ahead signs. The province said a recommended speed limit change at the intersection is currently going through the regulatory revision process, but has not yet been put in place.

“I was hoping (the safety changes) would help out. I certainly didn’t expect something like this to happen,” said Wischnewski.

On Tuesday, a 24-year-old man died following another crash at the same intersection. RCMP said an SUV, driven by an 18-year-old woman, was heading south on PR 206 when it collided with the man’s car, driving east on PR 213. The woman was taken to hospital with non-life threatening injuries. Mounties note speed and alcohol were not factors in the crash.

According to Wischnewski, this intersection is known by Oakbank residents as being particularly dangerous.

“We live in town and every time we hear an ambulance or first responders going by, our family, the first thing we do is we phone every single member of our family to make sure they’re safe,” he said.

“And I can pretty much guarantee you that everyone in town is thinking ‘Oh no, another one on Garven Road.’”

When Wischnewski heard about the fatal collision he was upset knowing someone lost their life over something that’s preventable.

He said he’s been thinking about how to make the intersection safer, suggesting ideas such as significantly reducing the speed limit, putting signs up warning about the intersection and adding more lighting to the area.

“It’s easy to find fault, but it’s better to find a solution and take action,” he said.

Wischnewski sent an email to Infrastructure Minister Ron Schuler pleading with him to take immediate action at the corner.

He said now that someone has died, he will continue to fight until more is done.

“Something is going to get done. The pressure is not going to stop until something is done. How many more people have to lose a loved one or suffer injuries because of this?” he said.

Wischnewski’s life has totally changed since the accident. He said he still has another year of recovery to get back to 85 to 95 per cent of where he was before, and has more surgeries ahead.

His hope for the future is that people will come together and put the pressure on until something gets done.