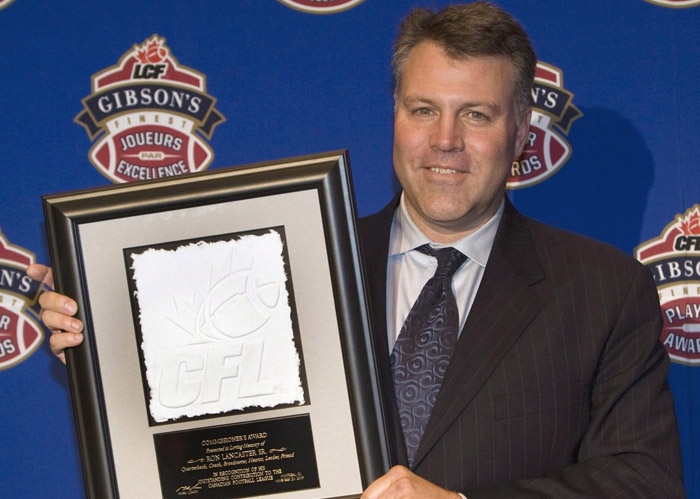 Ron Lancaster Jr. accepts the Commissioners Award on behalf of his late father at the CFL awards in Montreal, Thursday, Nov.20 2008. Ron Lancaster Jr., a former CFL assistant coach and the son of Canadian Football Hall of Famer Ron Lancaster, has died. (THE CANADIAN PRESS/Nathan Denette)

An official with the Hamilton Tiger-Cats said the younger Lancaster was found dead in his apartment in Hamilton on Tuesday night.

Neither the cause of death nor Lancaster's age were immediately available.

Lancaster Jr. was an assistant coach in the CFL with Toronto, Edmonton, Hamilton and Winnipeg.

He made five Grey Cup appearances, winning three, including in 1999 with Hamilton when his father was the club's head coach.

"The Lancaster name has deep roots in our league and our thoughts are with the entire family during this time," Blue Bombers president and CEO Garth Buchko said in a statement.

The elder Lancaster won two Grey Cups as a quarterback with Ottawa (196) and Saskatchewan (1966) before claiming two CFL titles as a head coach with Edmonton (1993) and Hamilton ('99).