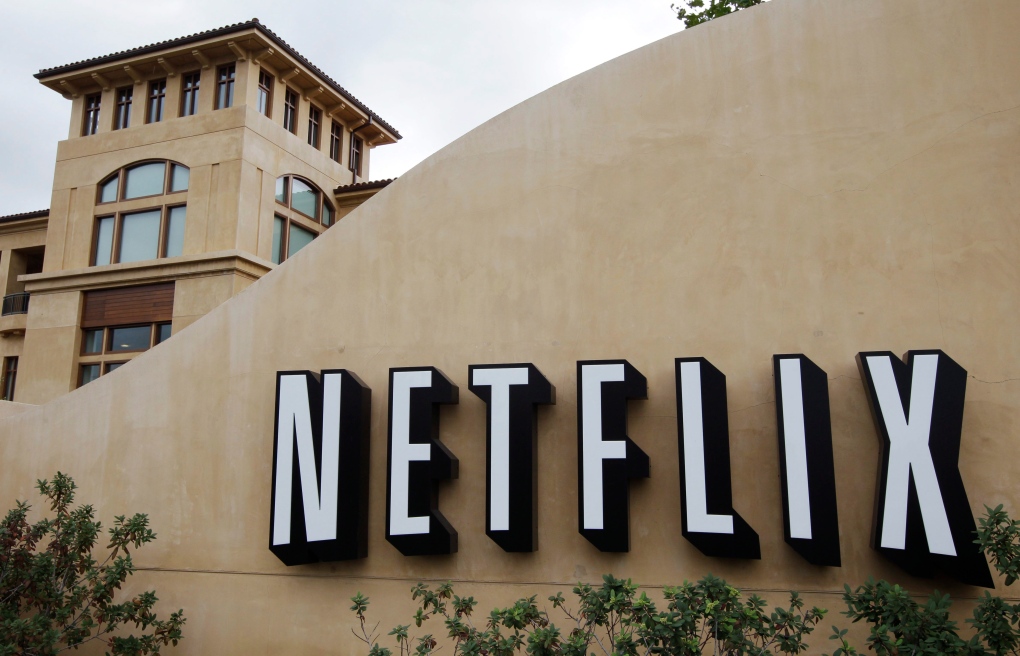 In this Oct. 10, 2011, file photo, the exterior of Netflix headquarters is seen in Los Gatos, Calif. (AP Photo/Paul Sakuma, file)

OTTAWA -- One of the hottest dramas to hit the fall season isn't on your TV screen -- it's happening behind the scenes in a battle of wills between the country's fastest-growing video supplier and Canada's broadcast regulator.

Netflix has told the Canadian Radio-television and Telecommunications Commission it won't turn over sensitive corporate information, despite being ordered to do so at a hearing last Friday.

"This is no longer a fight about confidential information but a much bigger fight about the CRTC's legal authority to regulate online video," said Geist, a professor at the University of Ottawa.

And the Prime Minister's Office is being blamed for forcing the regulator into a corner.

Industry watchers say Netflix is standing up to the CRTC after being emboldened by Prime Minister Stephen Harper, who has said his government will not allow levies against online video services to help pay for production of Canadian content -- something he has referred to as a "Netflix tax."

"This is a minor version of what we saw a little while ago with the Supreme Court (of Canada)."

In May, the Harper government was accused of trying to intimidate Canada's top judges after the chief justice of the Supreme Court tried to flag eligibility issues with the government's nominee for a vacancy on the top bench.

Netflix has been enjoying a growing following in Canada, with an estimated 25 per cent of anglophone Canadians signing up for the service in 2013, nearly twice as many as the previous year, as TV viewers embrace new ways of receiving content.

On Friday, an agitated CRTC chairman Jean-Pierre Blais ordered Netflix to hand over sensitive company information by the close of business Monday after a Netflix executive sought guarantees that it would remain confidential.

The U.S.-based online video streaming firm responded late Monday, saying it would not give the CRTC the subscriber and programming information being sought.

But perhaps more importantly, Netflix refused to acknowledge the authority of the CRTC.

"As we stated during our appearance at the hearing, specific information requested by the commission, which was ultimately the subject of various orders made by the commission, remains confidential and competitively sensitive, the disclosure of which to third parties would be highly prejudicial to Netflix," said Corie Wright, the company's director of global public policy.

"Moreover," she added, "the orders are not applicable to Netflix under Canadian broadcasting law."

Industry watchers are divided over whether the defiance will lead to a court battle.

But by inappropriately interfering in the CRTC hearings, the Harper Conservatives may have already rendered the regulator toothless, said Opposition heritage critic Pierre Nantel.

"It is simply scandalous," Nantel said.

"The CRTC is actually handling a super-delicate file, and the Prime Minister's Office is saying (to the CRTC) in the early stages of the consultations, 'You know what, no matter what you decide, it doesn't matter."'

Netflix has provided the regulator with some requested information -- none of which is considered confidential -- such as its Canadian and children's programming. Netflix won't say what it spends on producing or obtaining the content.

Why it won't provide subscriber and revenue information has left Winseck scratching his head.

Netflix discloses such information south of the border in annual reports to the United States Securities and Exchange Commission, which then makes the figures publicly available.

"The SEC requires far more disclosure from its telecom and media providers than (what's required) in Canada," said Winseck.

Google, which also took part in the CRTC hearings, agreed to requests for more information about its business dealings. But a spokesperson said it was a voluntarily move, not one required under Canadian law.

The CRTC said Tuesday that it would not comment further on its dispute with Netflix.

The battle erupted late last week during the final day of hearings, during which the regulator heard from more than 100 firms about the future of Canada's television industry.

Google warned that online delivery services such as Netflix and YouTube, along with consumers, would be harmed if regulations applied to Canada's traditional TV stations and content distributors were extended to the digital world.

Some of Canada's conventional broadcasters and distribution firms say online platforms should be forced to make mandatory contributions to the country's television programming system.

The CRTC is not expected to issue recommendations for new regulations until the end of the year at the earliest.