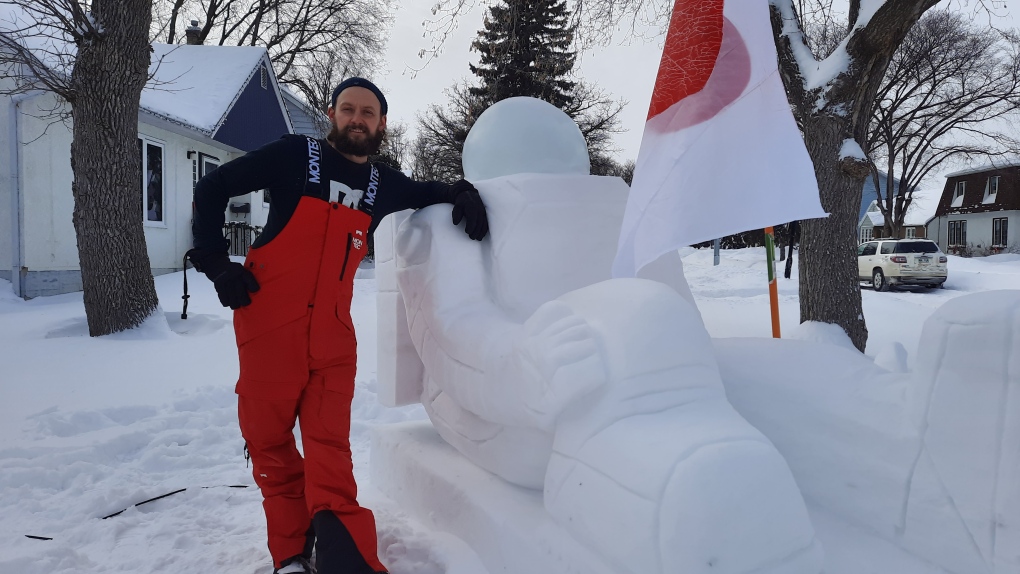 Step aside Dumbo – there is a new astronaut in town.

Residential snow sculptures are taking over Winnipeg yards this winter and this time, it is not a giant elephant.

‘In the Name of Love’ is the creation of amateur snow sculptor Bradley Gerbrandt who said the idea behind his space-themed snow man was inspired by a lamp.

“The head lights up and it was pretty cool so I thought wouldn’t that be neat to kind of make an astronaut and have a flag and kind of like claim this land in the name of love,” said Gerbrandt.

The flag in question is decorated with a heart.

The sculpture was formed with three blocks of snow, a key skill to snow sculpting which Gerbrandt said is something he has finally figured out.

He considers himself as an artist at heart and after several years of trial and error, he said last year was his snow-sculpting breakout.

He had two successful builds and this year, he brings that experience to his astronaut.

“It’s daunting a little bit but the medium snow is quite forgiving in if you make a mistake you can add snow to it and hide the lines where you patched it together,” said Gerbrandt.

Gerbrandt credits cold weather and the pandemic as key reasons for his hobby.

“What else are you going to do?” said Gerbrandt.

This particular project took about 16 hours over the course three weeks to complete and Gerbrandt hopes to get another one started this year.

As for long-term goals, he would like to get a chance to play with bigger snow blocks at something like the Festival du Voyageur.

“The guys at Festival have access to big machines that make gigantic blocks. It would just be a thrill to get going on one of those,” Gerbrandt said.

Feedback for his land-claiming spaceman has been positive. Most people slow down as they pass and maybe take a picture, but just recently he got higher praise in the form of the backup.

“Most people just slow down and take a look but the backup is nice,” said Gerbrandt.

“He rolled down his window and I said, ‘Hey,’ and he said, ‘I like this,’ and it meant a lot to me because I felt like the guy, maybe wasn’t the kind of thing he usually does like stop and say something like that.”