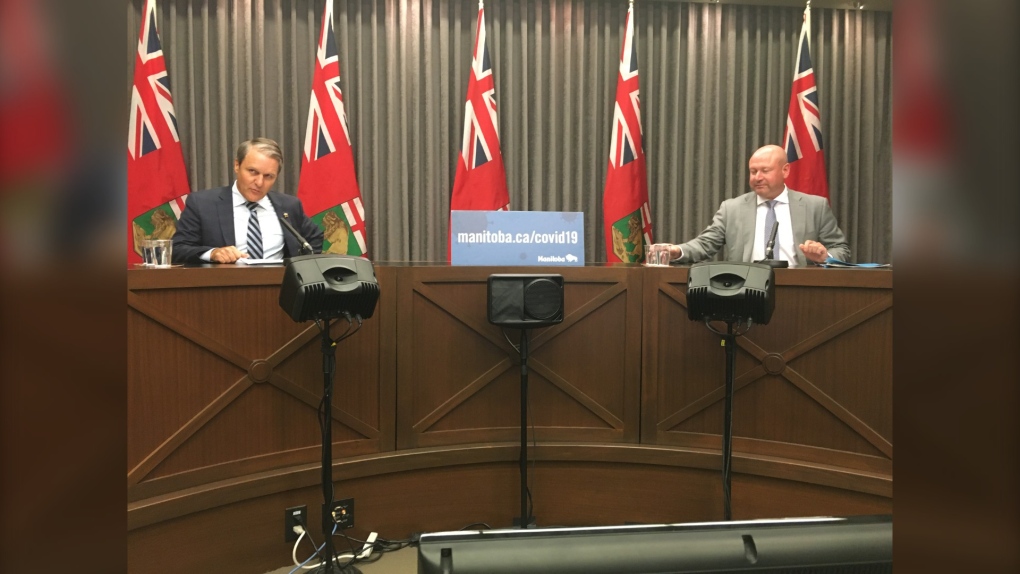 WINNIPEG -- The province has announced 15 new cases of COVID-19 have been identified in Manitoba.

On Thursday, Dr. Brent Roussin, the chief provincial public health officer, along with Manitoba's Health Minister Cameron Friesen, announced the new cases which now bring the total number of active cases in the province to 360.

Roussin said two previous cases have been removed from Manitoba's total – one had been from out of province, and another was removed due to duplication.

With these two cases removed, the new total number of lab-confirmed cases in Manitoba is 1,378 as of Thursday.

The cases announced Thursday include:

Roussin said the preliminary investigations show several of the cases announced on Thursday are close contacts of known cases.

He said no new cases of COVID-19 have been identified in any personal care homes in the province.

So far, 1,002 people in Manitoba have recovered from COVID-19 and the number of deaths related to COVID-19 remains at 16. There are 11 people in hospital, and three people in intensive care. The current five-day COVID-19 test positivity rate is 1.2 per cent.

The Winnipeg area continues to have the highest number of COVID-19 cases in the province, with 163 active cases reported as of Thursday.

Roussin said in the past seven days, there have been 22 non-epi-linked cases, which are considered to be community transmission.

Currently, the cases are only identified as being in the city, but Roussin said more information about these cases will be released on Friday.

"The city will be divided into 12 community areas, and like the health districts, the data will be regarding active and recovered cases, deaths and total cases will be available," he said.

PROVINCE KEEPING AN EYE ON THE PRAIRIE MOUNTAIN HEALTH REGION

Roussin said the province is seeing some early trends that the numbers of COVID-19 cases in the Prairie Mountain Health Region is improving.

The health region had been hit with a number of clusters, and in late August, the area was listed as orange in the province's Pandemic Response System, meaning restrictions were introduced, including caps on group sizes and the rules around face masks.

"We're going to watch that closely," Roussin said. "If we continue to see those trends moving that way for the next week, then we will certainly have very close eyes on when we can lift that restriction."

There were 1,173 laboratory tests completed on Wednesday, which brings the total number of lab tests done since early February to 150,350.

Public Health is reminding people only to get tested in they are experiencing COVID-19 symptoms, or unless otherwise recommended by Public Health.

The province also said the Keystone Centre Specimen Collection Site in Brandon is set to close permanently after September 12. Anyone seeking testing is asked to visit the Brandon Town Centre site.

Researchers illustrate the intensity of COVID-19 infections with new images

Would Canadians volunteer to be infected with COVID-19 to test vaccines?

Defying mask rules in Quebec will now be punished with fines up to $6,000

Infrared thermometers might be 'hygiene theatre,' but they won't harm your brain

The financial impact of COVID-19 will be billions of dollars in B.C., minister confirms

Can grandparents remain in our social circles once kids go back to school?