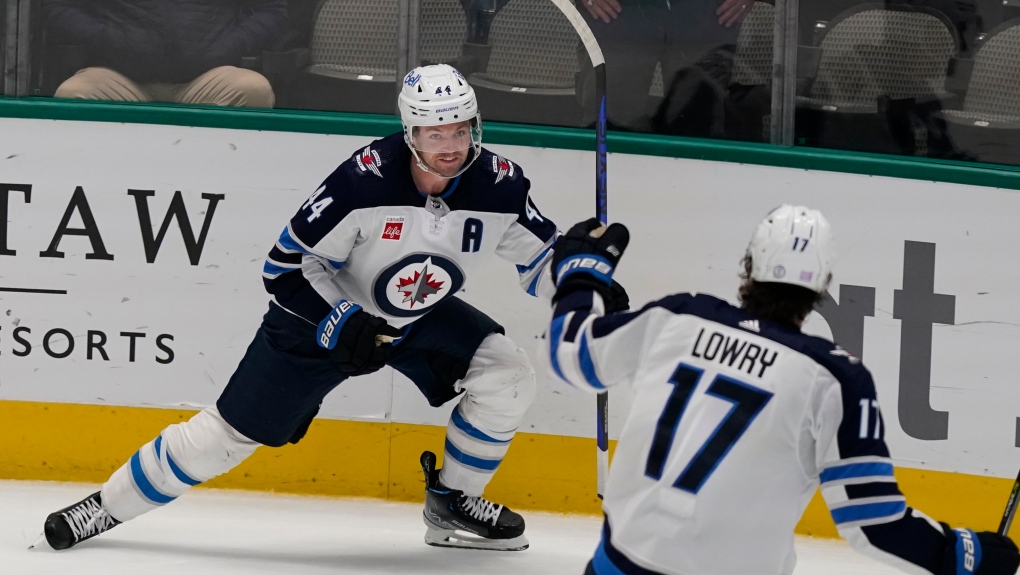 Red-hot Jason Robertson tied it for Dallas with two goals in the last 2:12 of regulation, but Winnipeg's Josh Morrissey scored 34 seconds into overtime to give the Jets a 5-4 victory over the Stars on Friday night.

The Jets pulled two points behind Central Division leader Dallas and out of a tie for second place.

Robertson set a Stars' record in the fast-paced first period with at least a point in 16 consecutive games when he assisted on a power-play goal by Jamie Benn. Robertson's two late goals gave him the NHL lead with 18. He has eight goals and nine assists in the last six games.

Adam Lowry had a goal and an assist for Winnipeg. Wheeler and Dylan DeMelo had two assists each. Cole Perfetti, Jansen Harkins and Kyle Connor also scored for the Jets, who never trailed.

A game-opening flurry led to four goals in the first 7:47 of play and an early 2-2 tie. That flurry followed Wednesday's game, when Dallas rallied from a 4-1 deficit by scoring five times in the final 9:45.

Perfetti put in a backhand for the first goal 1:32 into the game, and Harkins scored at 5:48 for a 2-1 lead and his first goal in six games since his recall from the AHL's Manitoba Moose.

The Stars nearly tied the game again on a power play with 12 minutes to play. Denis Gurianov sent a shot from the right faceoff circle off the left goalpost, and Hellebuyck then stopped Tyler Seguin's stick attempt with the rebound in the blue paint.

An annual survey on how trusting Canadians are suggests their faith in governments is rebounding as the COVID-19 pandemic begins to fade.

North Korean leader Kim Jong Un and his young daughter took centre stage at a huge military parade, fuelling speculation that she is being primed as a future leader of the isolated country as her father showed off his latest, largest nuclear missiles.