Number of Manitobans who believe health restrictions are excessive on the rise: survey 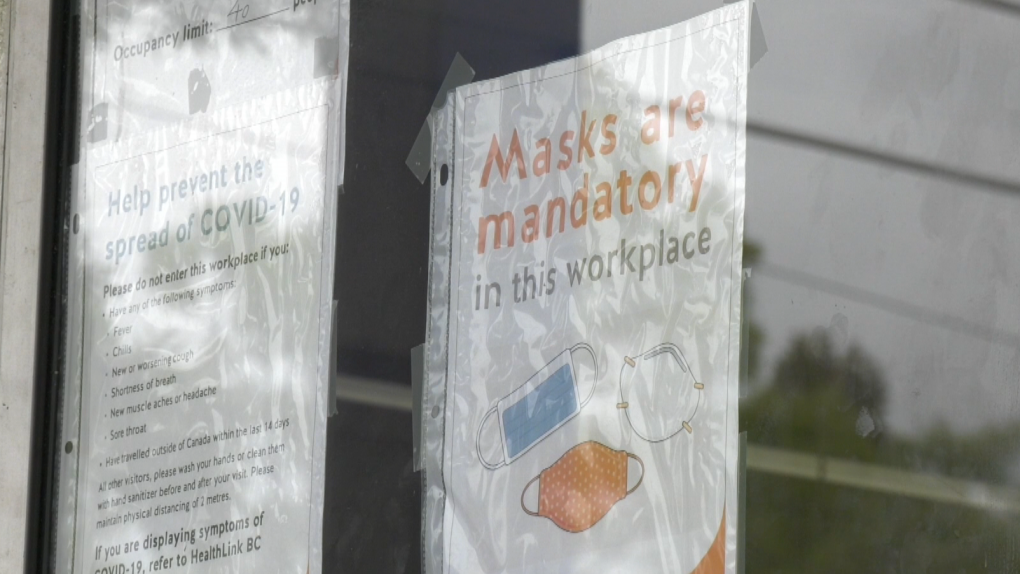 The survey found 23 per cent of respondents believe our current restrictions are excessive, compared to 10 per cent in October of 2020. (File Image)
Winnpieg -

The opinion research firm surveyed 1,189 Manitoba adults about a variety of pandemic-related issues between Oct. 19 and 26. The survey had a margin of error of +/- 2.8 per cent.

The survey found 23 per cent of respondents believe our current restrictions are excessive, compared to 10 per cent in October of 2020. 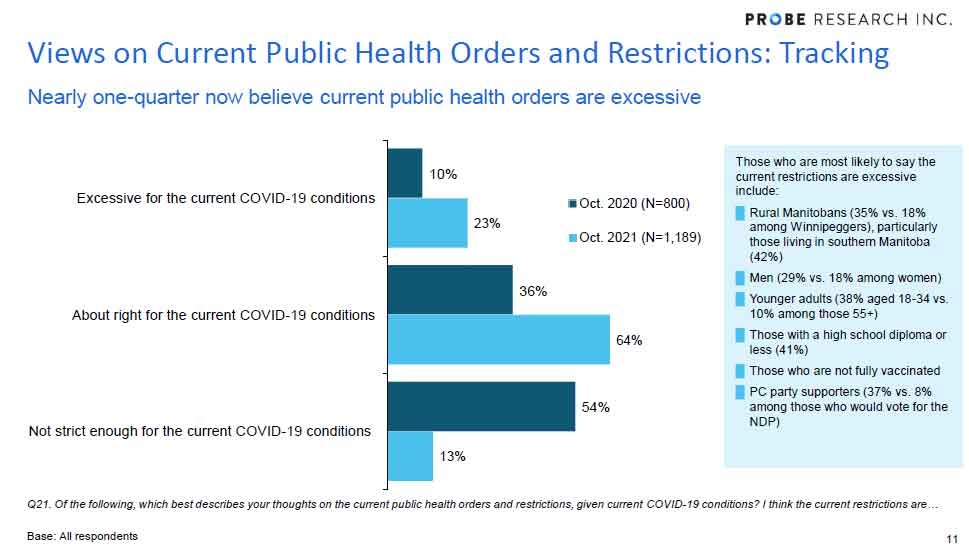 Southern Manitobans were most likely to say the orders are excessive, with 42 per cent of respondents agreeing versus 18 per cent among Winnipeggers. Of rural Manitoban respondents, 35 per cent said they thought the restrictions are excessive.

Men were also more likely than women to agree the orders are excessive, as were those with a high school diploma or less, younger adults, those who are not fully vaccinated against COVID-19, and PC supporters. 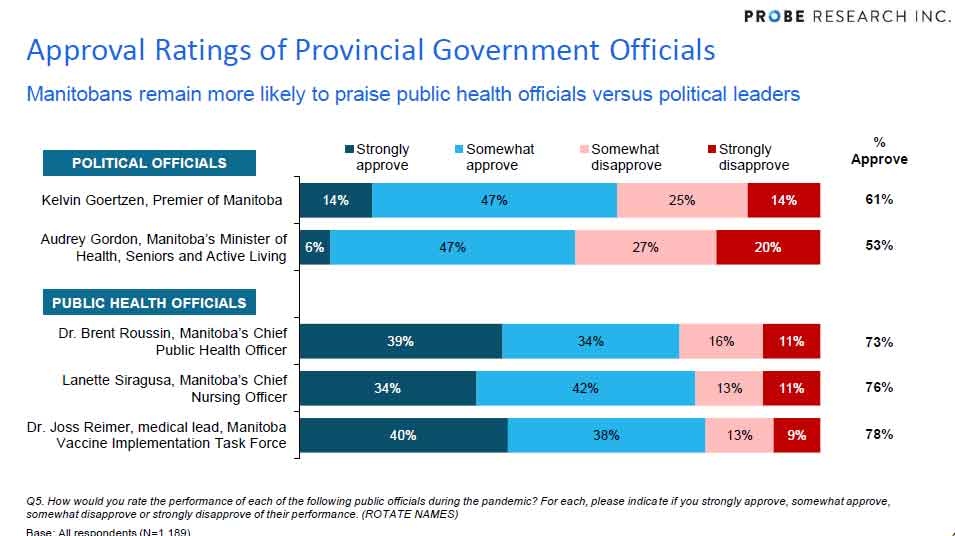 According to Probe Research, Pallister’s approval rating was at 41 per cent in Oct. 2020 and 29 per cent in June 2021, compared to Goertzen’s 61 per cent from the most recent survey in October 2021. 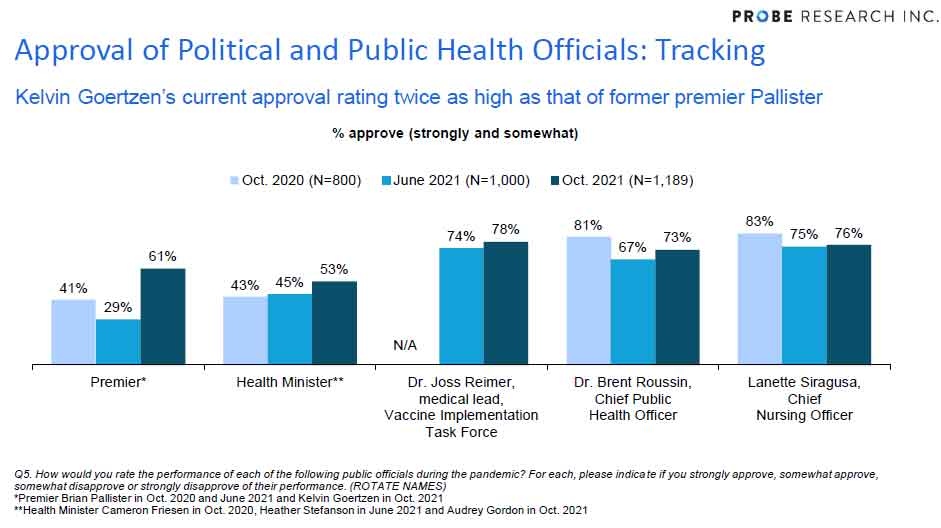 The survey also found only half of Manitobans approve of the government’s health and economic performance. 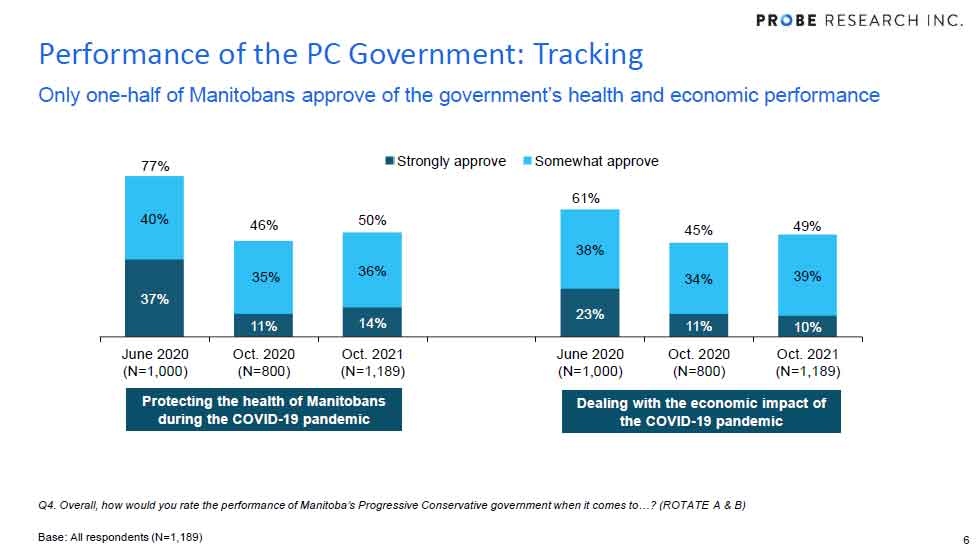 On the economic front, 49 per cent of respondents approved of the province’s performance, up from 45 per cent in October 2020 and down from 61 per cent in June 2020.

Meanwhile, three-quarters of Manitobans believe their province did a better job compared to Alberta and Saskatchewan.

Seventy-seven per cent of respondents agree Manitoba has done a better job of dealing with the pandemic than our prairie neighbours. 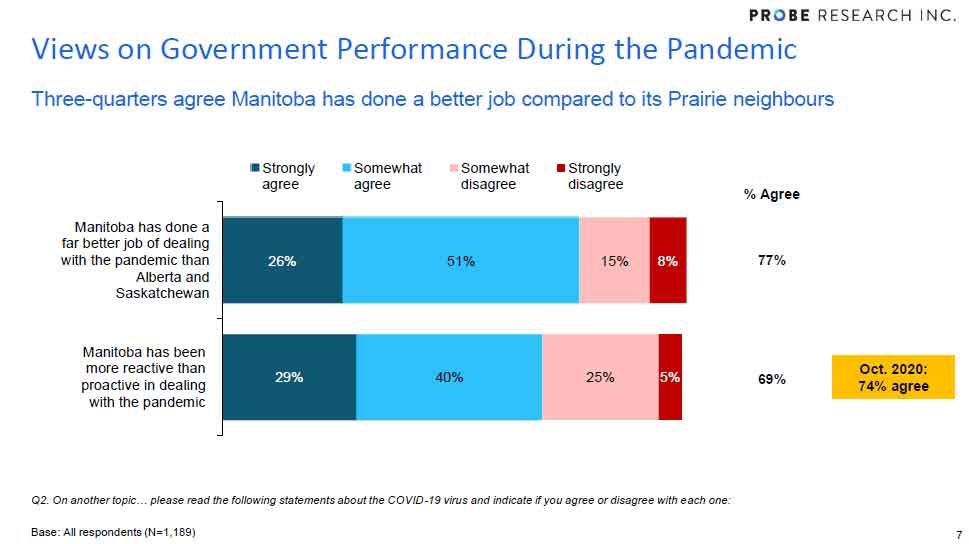 However, 69 per cent of respondents agree Manitoba has been more reactive than proactive in dealing with the pandemic, compared to 74 per cent in October 2020.

The survey also found Winnipeg respondents were most likely to say Manitoba performed better than Alberta and Saskatchewan, with 80 per cent strongly or somewhat agreeing, compared to 65 per cent in southern Manitoba and 76 per cent in rural or northern Manitoba.

Respondents with a higher level of education and who are fully vaccinated are most likely to endorse Manitoba’s pandemic performance over our western counterparts.

Another key takeaway from the Probe Research study – eight in 10 Manitobans believe Manitoba should take patients from outside of the province.

The complete survey summary can be found here.