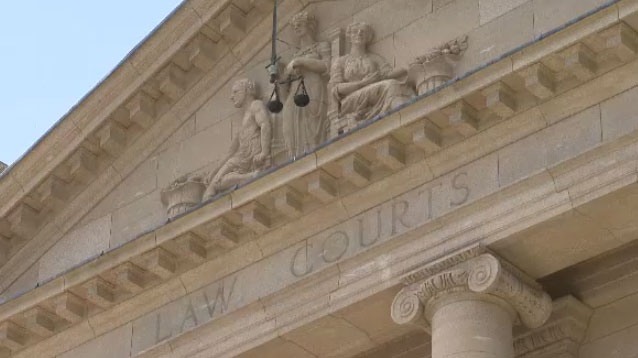 The Manitoba Provincial Court is pictured in an undated image.

WINNIPEG -- A Manitoba judge says an Indigenous man with fetal alcohol spectrum disorder had a "hellish" time at a correctional facility, where he alleged he was sexually assaulted by other inmates.

A provincial court judge wrote in a sentencing decision that the 21-year-old had tried to report the alleged sex assault at the Brandon Correctional Centre to local police. But he said officers laughed at him.

The judge also said the man spent about six months in solitary confinement, leading to a significant decline in his mental health.

"It is not hard to see why this vulnerable young man would be mentally worn out," the judge wrote earlier this year.

His "tenure at BCC was hellish."

The man, who the court heard is of mixed Indigenous, European and African background, pleaded guilty to two armed robberies, wearing a disguise and using an imitation firearm. While there are no publication bans in place, The Canadian Press is not naming the man because the case involves allegations of sexual assault.

The judge sentenced him to 30 months but, taking into consideration the time he already spent behind bars, reduced it to six months.

The man had a difficult life leading up to the robberies in the summer of 2019. Court heard he was staying in a Winnipeg motel with his mother, who was in the throes of addiction. His girlfriend had recently died from an overdose.

"He was in a terrible state of crisis, grief, turmoil and poverty," the judge said.

On the day of the robberies, court heard that two co-accused went into his hotel room and said, "C'mon, let's go." But he didn't know where they were going or what they were doing.

They ended up robbing two businesses.

"The police were abrasive and aggressive to him and suggested his mother would be arrested if he did not confess," the judge said.

She added that the man expressed remorse for the robbery victims and wished to apologize.

The case was heard in Manitoba's specialized fetal alcohol spectrum disorder court, which began in 2019 with judges who understand the complexities of the disorder as well as support workers.

When a fetus is exposed to alcohol, it can cause brain injury. Some people with the disorder struggle to understand consequences of their behaviour and many are impulsive. They follow others easily and can have drug or alcohol problems.

Court heard there was nothing in the man's corrections file about his diagnosis, even though it's information the institution should have.

The judge said the man "suffered significantly during his remand status, more than most other offenders."

Court heard he has been incarcerated for the entire COVID-19 pandemic. The judge wrote that inmates are more isolated than ever with no programs, activities or visitors.

While at the Brandon Correctional Centre, the man was further isolated while in solitary confinement.

Court heard he and his lawyer requested transfers to other institutions, but they were denied. His lawyer also wrote to the jail's superintendent but didn't receive a response. However, the man was moved to another correctional centre last October.

The judge also said the man's alleged sex assault by three other inmates at the jail was reported to Brandon police who apparently laughed at him and asked if he was serious about making a complaint."

The man was told that officers would later take him to a police station to make a formal, video-taped statement.

"They never returned," the judge said.

Brandon police Sgt. Kirby Sararas said in an email to The Canadian Press that police received a complaint about a sexual assault at the correctional centre on Oct. 13. She said officers interviewed suspects and gathered evidence and the investigation is ongoing.

Sararas said restrictions during the pandemic have complicated and slowed down investigations inside correctional facilities.

She added that police have not received complaints about officer misconduct in the case.

Manitoba Justice could not speak to specifics of the case but said every allegation of sexual assault is taken seriously.

The department said in an email that segregation policies include daily meaningful contact with staff, interaction with other inmates when it is safe and regular visits by medical staff.

The department added that transfers generally occur for operational reasons, not by inmate request. They have been particularly difficult during COVID-19.

The judge said the man has good prospects for rehabilitation. He is sober, has cut ties with his mother and is looking forward to building a relationship with his young daughter.

In her sentencing, the judge said she also took "into account the extremely tragic and horrific time he has already suffered in jail."

This report by The Canadian Press was first published March 11, 2021.