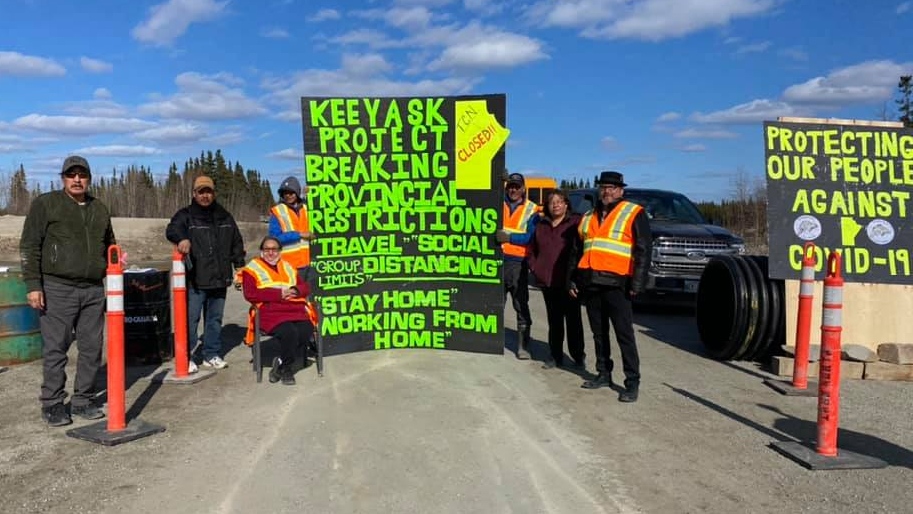 WINNIPEG -- A group of Tataskweyak Cree Nation members are blocking the road to a Manitoba Hydro construction site to try and stop the spread of COVID-19 into their community.

The blockade to the Keeyask Generator Project, a multi-billion dollar hydroelectric project, was created to stop construction workers from entering the community during a shift change on May 19.

"The whole point of our lockdown is to keep COVID out of Northern Manitoba," said Councillor Nathan Neckoway of Tataskweyak in a news release. "We are trying to do everything we can to protect the safety and wellness of our citizens."

Manitoba Hydro said its shift change plan is based on the latest information and guidance from Manitoba Health.

"For the past eight weeks, the project site was essentially in lockdown, operating at about half-capacity with 700 workers who volunteered to stay," said a spokesperson from Manitoba Hydro. "At the completion of the shift change, approximately 1,000 workers will have returned to the site, again following the plans and protocols endorsed by Manitoba Health and the Chief Medical Officer."

The spokesperson went on to stress that project contractors are minimizing the number of out-of-province travellers and that the company is only bringing back returning workers to the project.

"First Nations in Northern Manitoba are extremely concerned with the plans Manitoba Hydro has to bring in people from across Canada and the United States to the Keeyask construction site in a few days from now," said Grand Chief Garrison Settee. "I am disappointed that despite multiple and ongoing calls for action, Manitoba Hydro continues to ignore the concerns expressed by First Nations.”

Even with a health plan in place, leaders of the Tataskewayak Cree Nation aren't satisfied.

"Despite the fact that we are future owners of the Keeyask site, along with current partners, we feel we are being completely ignored," said Chief Doreen Spence of the Tataskewayak Cree Nation. "Our community is right in the center of all this development as we are less than 50 kilometres away from the construction site."

Manitoba Hydro said the shift change will go on as planned.