'We all have biology': City committee to consider call for public bathroom strategy 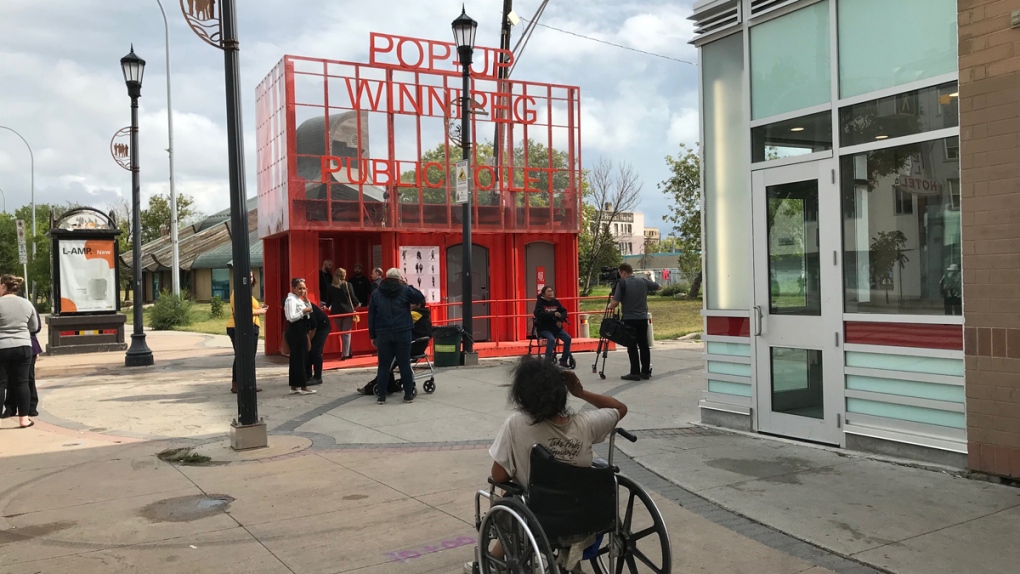 CTV News Winnipeg file image of the pop up toilet taken in August 2019.

A report before a city committee is calling on councillors to resurrect a draft strategy on avenues Winnipeg could take to ensure public bathrooms are available downtown.

“I get people stopping me all the time -- they want public washrooms,” said Ross Eadie, the city councillor who introduced a motion calling on the city to complete the “Places to Go” strategy.

“Everybody wants to use one. Kid all of a sudden has to use the washroom -- where do you go?” he said.

“Nobody wants to do their business in public,” Eadie said.

Eadie said the original report was drafted around 2010 but never finalized, and a policy decision is needed.

“We as council have to decide whether or not we’re supporting publicly available restrooms,” he said.

‘It is just like roads’: Architect says washrooms could be viewed as an essential service

In the two most recent summers, popup toilets were set up in downtown Winnipeg and staffed by attendants from morning until evening.

Wins Bridgman with BridgmanCollaborative Architecture designed the award-winning popup toilet, built out of a shipping container, in partnership with the Downtown Winnipeg BIZ and Siloam Mission.

“People used them. And people were willing, at least in their surveys, to stay longer downtown, if they knew there was a safe, clean washroom available to them,” he said, mentioning that he has spoken with people who are forced to plan their daily schedules around access to washrooms.

Bridgman will speak at the committee meeting Friday in support of the motion.

“Every other city in North America has understood that they need them,” said Bridgman, explaining how a policy could be framed. “Therefore, it is just like roads, we should have washrooms in our city, in order to create a civil environment for each other,” said Bridgman, calling it an accessibility issue.

“We all have biology.”

Bridgman acknowledged that there is no money budgeted for public washrooms, which means councillors may not be motivated to create a policy that could cost the city.

Looking for solutions to the washroom problem

At the meeting Friday, the architect plans to speak about potential solutions, including one named specifically in the motion -- public private partnerships.

Bridgman said partners could fund the building of washrooms that display advertising, although a current signage bylaw that prevents signs from going up on downtown buildings would likely have to be amended.

Bridgman also said because of the high population of vulnerable people in Winnipeg, partners would also have to fund bathroom attendants.

“We need to have a human presence. We need to be able to keep our eye on the washrooms, we need to make sure they’re not being abused and that they’re safe for everyone,” he said.

Other solutions he said could be considered include incentivizing businesses that allow public access to facilities and changing the rules for how outdoor spaces are constructed.

“Currently, there is no obligation in the building code to provide washrooms for outdoor spaces.”

But he said a policy is needed before any solution can be settled on.

The standing policy committee on protection, community services and parks will consider the motion Friday.