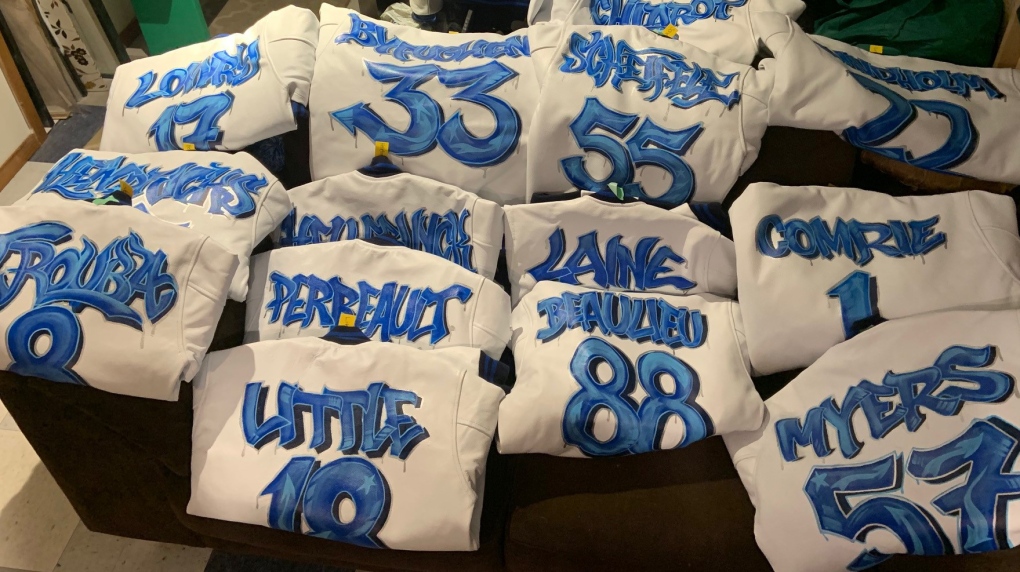 Each woman’s jacket is designed with their hockey-playing partner’s jersey number and last name in graffiti-style lettering. (Source: Pat Lazo)

A Winnipeg artist was given the opportunity to showcase his work on a public platform after painting graffiti-style jackets for the wives and girlfriends of Winnipeg Jets players.

“I was excited to hear about the project but then the closer it got, it’s just like ‘Oh this is real,’” said Pat Lazo, the artistic director and co-founder at Graffiti Gallery.

Lazo said the project came about after a local business owner connected him with Sam Wheeler, Blake Wheeler’s wife, and through a “slew of emails” the concept for the jackets was born.

Each woman’s jacket is designed with their hockey-playing partner’s jersey number and last name in graffiti-style lettering.

“Last year the ladies had numbers sewn onto their jackets with their last names on there. This year they wanted something more custom and graffiti-style,” the artist said.

Painting the 21 coats created a bit of a time crunch for Lazo, who said he’d put his son to sleep and then work in the studio until 2 a.m.

But the graffiti artist said despite the hours it was an enjoyable project to work on, and he’s glad he could take part in the Jets’ playoff celebrations.

“It’s such a unifying experience, you know, we’re lucky to have a team that’s contending,” he said.

Lazo met with the wives and girlfriends at a restaurant ahead of the Game 1, where they were wearing the jackets and sitting in front of a mural he had painted.

“It was super cool to see them there and then wearing jackets and then in front of a mural that I painted,” he said.

“So I was pretty stoked to hear them super happy about them.”