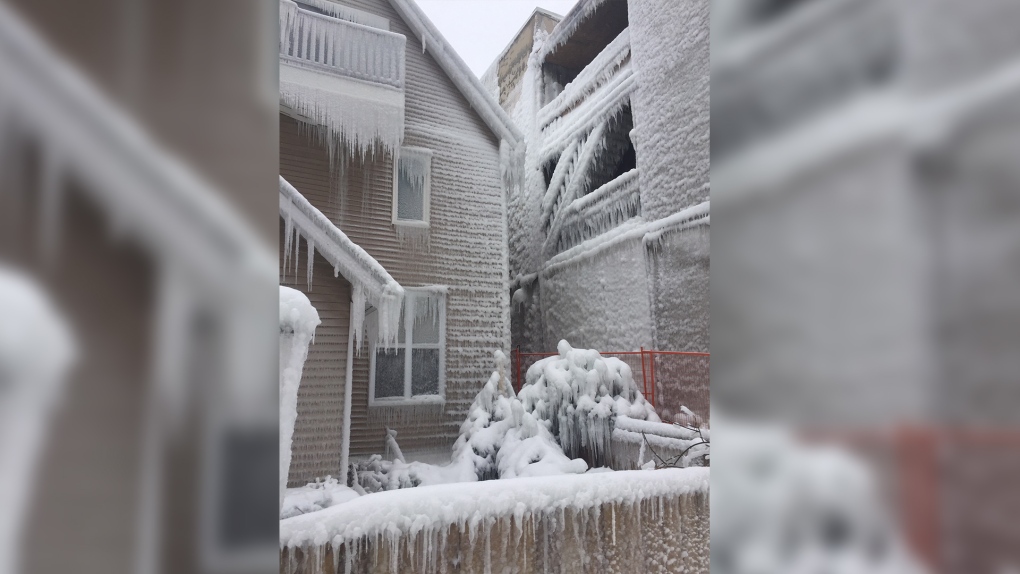 Cereceda says when she returned home her house and her trees were encased in ice. (Source: Mike Arsenault/CTV News Winnipeg)

WINNIPEG -- A Winnipeg woman says she doesn’t feel safe enough to return home after a fire in the vacant apartment building next door has left the building in a grave state.

On Jan. 8 around 8 p.m., fire crews were called to the empty building in the 400 block of Maryland Street where they encountered thick flames and black smoke. The fire was declared under control at 1:25 a.m. on Jan. 9.

But this wasn’t the first time crews have been called to this Maryland apartment. Around one year ago, dozens of people were forced from their homes after a fire began in this same building. Exactly one week later, another fire broke out.

On Jan. 9, the city said the building will be demolished, but it hasn’t happened yet.

Julia Cereceda, who owns the home next door to the apartment building, was evacuated from her home and provided a three-night stay in a hotel by the Red Cross. By Saturday she was told it was safe to go back home, but she is worried about the vacant building’s sturdiness.

The homeowner says she’d have more peace of mind if an engineer told her it’s safe to return home.

“I’ll trust and engineer to tell me that the building’s not going to fall on my house.”

A HOUSE COVERED IN ICE

On top of her concerns regarding the stability of the building next door, Cereceda says when she returned home her house and her trees were encased in ice.

“Even my car is sitting on McGee Street, all four tires, completely encased in ice, and I have absolutely no way of getting my car out.”

Cereceda says she has called 311, the police and the fire paramedic service to help with the issues involving her home, but has been shuffled around from department to department with no one offering concrete assistance. She says the only piece of information she’s been given is to contact Public Works – who she has put in a claim with – if she doesn’t hear from them by next week.

“All I know is that the city has been no help to us,” she said.

WHAT CAN BE DONE

Cereceda says the city needs to do more to make sure derelict buildings are demolished in a quick and orderly fashion.

“Now they have a building that’s literally gutted and they’re still sitting there, that building is still standing, where that building should’ve been demolished within days of the incident happening.”

She says there’s nothing that can be done about the ice, she just has to wait for it to melt, but that the city should come help deal with the trees, hydro lines, and frozen garbage cans.

“I’m just looking for someone to take some responsibility in the city. Somebody has to.”

CTV News Winnipeg has learned the apartment will be demolished on Jan. 15, and has reached out to the city for comment.

- With files from CTV’s Mike Arsenault and Stephanie Tsicos