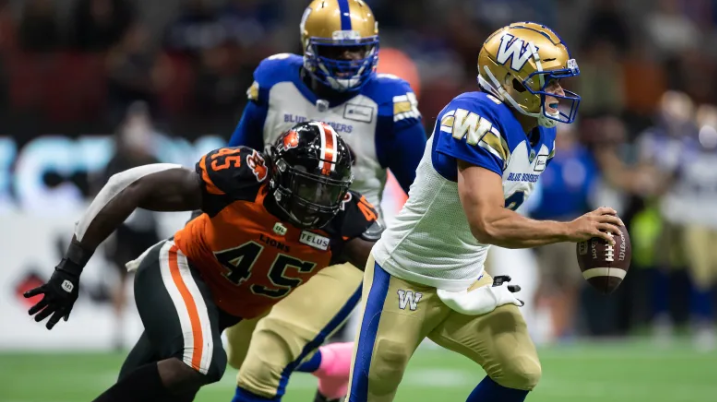 Winnipeg quarterback Zach Collaros, right, gets away from B.C.'s Tim Bonner during the first half of the Blue Bombers' 30-9 win over the Lions on Friday. (Darryl Dyck/The Canadian Press)
VANCOUVER -

Winnipeg Blue Bombers receiver Kenny Lawler felt he had something to prove as he lined up against the B.C. Lions Friday night.

He responded to the internal pressure with 12 receptions for 205 yards, helping his team to a dominant 30-9 victory.

"When I come here its personal," Lawler said, adding that he played for the Lions in 2018 and when he tore his hamstring, he didn't appeciate the way the club dealt with him.

"I just try to hold myself to the highest standard and make the most plays possible so that the whole league and B.C. knows."

Bombers quarterback Zach Collaros threw for an incredible 417 yards in Friday's win, connecting on 28-of-33 passes, including touchdowns to Lawler and Rasheed Bailey in the second quarter.

Kicker Ali Mourtada contributed a trio of converts and three field goals for Winnipeg (7-1), which won a fourth game in a row and is firmly entrenched at the top of the CFL standings.

The Bombers were coming off a bye week and but stayed focused and didn't pay much attention to the standings, said head coach Mike O'Shea.

"We really don't think very far ahead. I think our guys are playing well," he said. "There is still room for improvement. They are all committed to that which is extremely important. They are a good football team right now. It's not by accident, they work hard at it. "

The Bombers dominated in the air and on the ground against the Lions, and spreading the ball around was key, Collaros said.

"Guys made plays when it came their way. That's the kind of mentality of that group," he said. "They are very selfless. They don't care who gets the touchdowns, who gets all the yards, as long as we win the game. Hats off too all those guys. They played great and made plays for me."

Lions rookie Nathan Rourke replaced Reilly late in the fourth quarter. He threw 55 yards in relief and was sacked once.

The Lions (4-4) relied on Jimmy Camacho for offence as the kicker was good on all three field-goal attempts, including a 49- yarder.

"Just offensively as a whole, we were stuck in the mud. So we've got to get that figured out, of course. Part of that is playing against a really good defence. But we can't let that stop us," Reilly said.

"Tonight was just one of those nights that we got spanked all night and soundly beaten by the team that was the better team tonight, for sure."

The Lions showed signs of life when Rourke entered the game late in the fourth quarter.

The 23-year-old from Victoria marched the offence downfield with a series of mid-range passes before Winnipeg's Mike Jones intercepted Rourke's long lob into the end zone.

A combination of passes and rushes got Winnipeg over the goal line late in the fourth quarter.

Sean McGuire capped the 10-play, 81-yard drive by smuggling the ball into the end zone for his league-leading seventh rushing touchdown of the season.

Mourtada kicked the convert to give the Bombers a 21-point lead.

The two sides traded field goals through much of the second half, including Mourtada's 23-yard boot early in the final frame.

The play put the Lions in decent position, but Reilly and his side couldn't break through the Winnipeg defence and settled for yet another three-pointer.

"We've got to execute better at a higher level," Lokombo said. "That's a championship team right there and when a team like that comes to your home place, you've got to bring your A-game, man. Tonight we didn't get the job done."

Lawler caught a 44-yard throw from Collaros and had a chance to dash deeper into Lions' territory, but Lawler slipped on the turf before he was tackled by Gary Peters.

However, moments later, Collaros sailed a crisp 10-yard pass to a wide-open Bailey in the end zone.

Earlier in the quarter, the Bombers' QB connected with Lawler on a 20-yard pass that put Winnipeg on B.C.'s 27-yard line.

Collaros then sent an arching 27-yard lob across the field to Lawler in the end zone. Lawler made the catch despite having Lions' defensive back Bejour Wilson draped all over him.

Each side capped drives with 13-yard field goals in the first quarter.

There were some tense moments for B.C. at the beginning of the second quarter after Lucky Whitehead was crushed by Winnipeg's Brandon Alexander following a catch.

The star receiver went to the locker room before reappearing on the sideline with a bag of ice on his right hand. He was initially ruled out for the rest of the game, but Lions' head coach Rick Campbell said a team doctor reassessed Whitehead during halftime and determined it was safe for him to return to the field.

Campbell said Whitehead will undergo further tests Saturday to determine the extent of the injury.

Whitehead, who played for the Bombers in 2019, came into Friday's game leading the league in receiving yards with 655.

The Blue Bombers are at home Oct. 8 to the Edmonton Elks. The Lions have a bye week before returning to action Oct. 16 against the visiting Calgary Stampeders.

NOTES: Andrew Harris totalled 81 yards on 14 carries for the Bombers. ... B.C. has lost two in a row and is 1-4 against West Division opponents. Winnipeg's Jackson Jeffcoat and Willie Jefferson each recorded a sack. They each have six this season, which ties Calgary's Shawn Lemon for the second-most in the league. B.C.'s Bryan Burnham has gone 90 consecutive games with a catch.

This report by The Canadian Press was first published Oct. 1, 2021.