Bombers miss their shot at best in the West 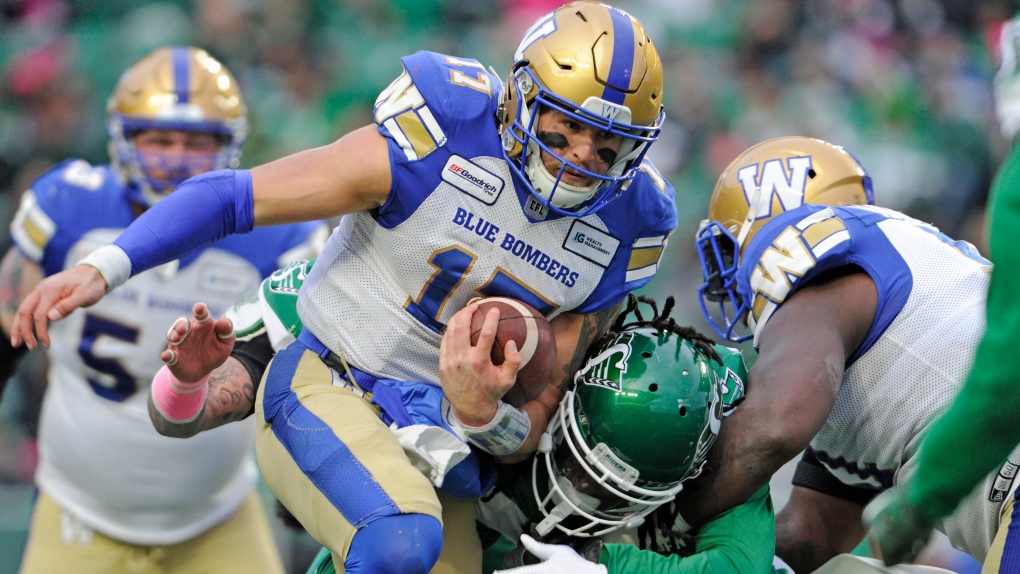 REGINA -- Shaq Evans scored the game's only touchdown, but it was enough to propel the Saskatchewan Roughriders a 21-6 triumph over the Winnipeg Blue Bombers on Saturday.

Evans' 61-yard touchdown reception late in the fourth quarter capped a solid night for the slotback, who caught seven passes from Cody Fajardo for 193 yards.

Brett Lauther added four goals as the Riders improved to 10-4 and moved into first place in the West Division. Winnipeg has lost three straight games to sit at 9-6.

The Riders have won two of the three head-to-head contests versus Winnipeg this season and therefore own the tiebreaker should the teams finish the regular season tied in the standings.

Saskatchewan's defence made life miserable for Winnipeg quarterback Chris Streveler. Streveler was intercepted twice -- once in the end zone and the other at the one-yard line -- and sacked three times.

Streveler finished the night completing 26-of-40 pass attempts for 254 yards.

The kickers produced all of the first-half scoring as both offences struggled to find any traction.

Lauther kicked two field goals (49 yards, 48 yards) and punter Jon Ryan had two of his punts bounce into the end zone for singles.

Winnipeg got on the scoreboard with one second remaining in the half when Justin Medlock kicked a 27-yard field goal.

The Riders led 8-3 at halftime.

Saskatchewan's deepest penetration into Winnipeg territory (eight-yard line) came on their first possession of the third quarter. It was the Riders' first trip inside the Winnipeg 30-yard line. The drive stalled there, however, and Lauther kicked his third field goal of the game to push the lead to 11-3.

Medlock's second field goal of the night -- from 37 yards -- early in the fourth quarter brought Winnipeg to within five at 11-6.

Winnipeg's offence moved the ball inside the Saskatchewan 30-yard line on three occasions, yet came away with just three points. The latter two possessions resulted in turnovers. Streveler was sacked and stripped of the ball by A.C. Leonard, with the Riders recovering the fumble. On their next possession, Streveler was intercepted by Ed Gainey in the end zone.