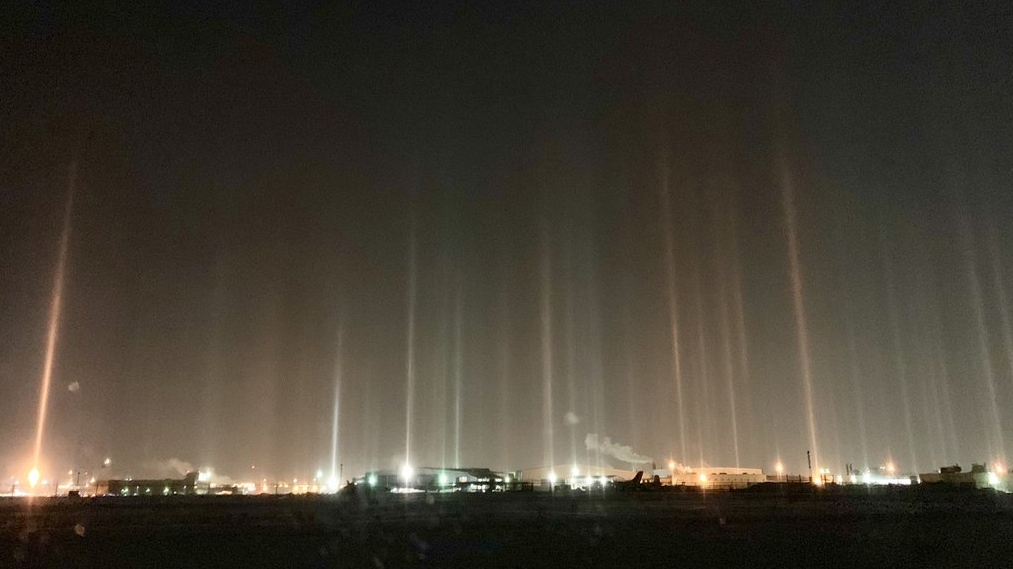 On Saturday night many residents noticed beams of light, known as ‘light pillars,’ glowing above the city. (Source: Aryanne Lu/Twitter)

Though many Winnipeggers may not welcome the freezing temperatures currently gripping the city, many took to social media with excitement over an optical phenomenon brought on by the cold.

On Saturday night many residents noticed beams of light, known as ‘light pillars,’ glowing above the city.

According to Scott Young, manager of the planetarium and science gallery at the Manitoba Museum, light pillars are formed during cold, calm conditions when light from the earth bounces off ice crystals floating in the atmosphere.

“Under very certain cold conditions and very, very calm conditions, you get very thin plates of ice crystals that are kind of like mirrors. And if the air is calm they just sort of float down through the atmosphere, almost like a feather floating, and they all line up so that they are facing in the same direction,” he said.

“So when that happens the light that is bouncing off of them from the ground is reflected back into an almost laser-like reflection and that’s when we get those really highly-focused beams of light coming up from the street light or the other lights here on the ground.”

Young added these ice crystals are fairly low in the atmosphere.

He said that a person won’t see a light pillars that are right next to them, but rather they are visible above lights that are over the horizon or behind a building or trees.

“It’s almost like a rainbow in that you can’t go to them and actually find where they are, they are just an image from distant lights being reflected, just like you can’t actually go and stand at the end of a rainbow because it always seems move away from you. It’s the same thing with these light pillars,” Young said.

- With files from CTV's Megan Benedictson

It was a little cloudy, and very cold but I managed to snap this photo of #LightPillars over #Winnipeg! #mbstorm https://t.co/xEaoh9uYbT pic.twitter.com/jgizMN01b4