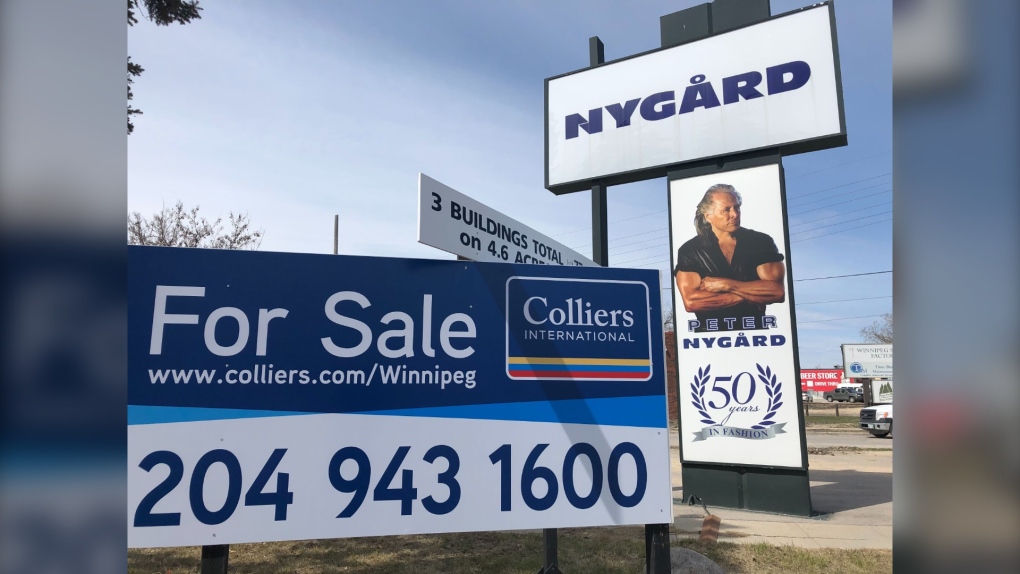 For sale signs can be seen in front of several Nygard stores in Winnipeg. (CTV News Photo Ken Gabel)

WINNIPEG -- A hearing was held Monday in Manitoba’s Court of Queen’s Bench on how to begin liquidating assets owned by Winnipeg fashion mogul Peter Nygard, now that the province is reopening.

“As certain governments begin to respond to the COVID-19 pandemic by the lifting or amending of public health orders to loosen restrictions and gradually reopen businesses, the Receiver and the Consultant intend to commence with the Sale Approval Order,” reads a report submitted May 28 by the receiver Richter Advisory Group Inc.

Richter now controls nine Nygard companies that went into receivership last March. Since then, Justice James Edmond approved the sale of the Nygard group’s assets, to repay millions of dollars owed to lenders, but the pandemic has complicated the liquidation process.

According to Richter, the Nygard group owes $2.7 million in unpaid rent to 60 landlords, which has been adding up since March, when the stores were shuttered because of COVID-19.

“There is urgency to this issue,” said Justice Edmond on Monday, but he added more time is needed to review documents and adjourned the hearing to Tuesday.

The Nygard group employed approximately 1,550 people at 169 retail outlets in North America who have been laid off since the company went into receivership.

Nygard announced he was stepping down from his company in February, hours after the FBI and New York police raided the company’s headquarters in New York.

The 78-year-old businessman is facing a class-action lawsuit, launched by 46 women who accuse him of rape and running a sex trafficking ring.

Nygard’s lawyer calls the accusations completely false. The allegations have not been tested in court.