As Winnipeg continues to sit under a rainfall warning, residents are dealing with overland flooding.

On Bank Avenue in St. Vital, the road has turned into one giant puddle. Tamara Roshka, who lives on the street, believes it is due to a clogged storm drain thanks to neighbouring construction.

"It's definitely a concern because I don't have a sump pump. A lot of these older houses around here don't have sump pits, so definitely the overland flooding is the concern for us," she said.

It's a similar story a few streets down, where Rebecca Berthelette's backyard is filled with half a foot of water.

"You know it makes it really hard for my dogs because they have literally the smallest area to go to the washroom," said Berthelette, "As well, my mom has an at-home daycare, so the kids literally can't like go outside and play."

Denver Property Restoration Services, a company that deals with flooding, says water is instantly becoming runoff because the frozen ground can't absorb it.

Rob Manksy, a project manager with the company, said he’s received many calls about water leaking through cracked foundations and clogged drains.

He suggests people check their homes before it's too late.

"Just that they're making sure their foundations and everything, that the grading and sloping is away from their properties," said Manksy.

Manksy also recommends homeowners test their sump pumps before actually needing to use them and ensure their drains are clear; something he suggests making an annual chore.

As for people already dealing with flooding, all they can do is hope for drier weather -- something Environment Canada is forecasting won't happen until Sunday evening. 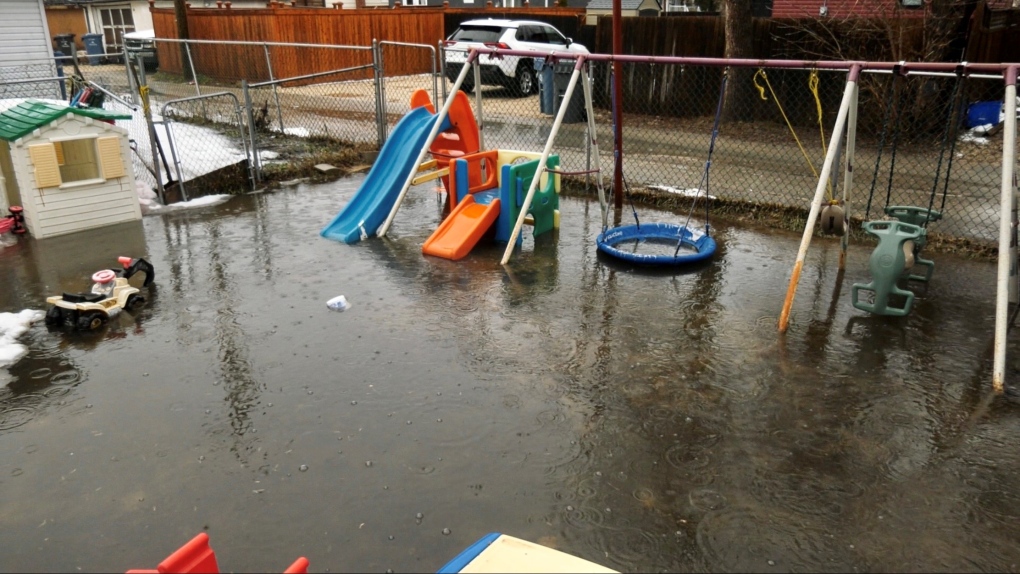 Rebecca Berthelette's backyard is filled with half a foot of water on April 23, 2022. (Source: Mason DePatie/ CTV News Winnipeg)

"I hope it's not going to be an issue," said Berthelette. "I think we have had water problems before, though, so hopefully, it's not because of the flooding."

"It's creeping up, it's getting over the sidewalk, and I was talking at 311. I'm a little bit concerned if I should be picking up some sandbags too," said Roshka.

In an email to CTV News, the City of Winnipeg said residents can access flood resources on its website.

It is encouraging Winnipeggers who notice flooding to call 311.