Feeling nature call while waiting for a drive-thru COVID test? WRHA has made some improvements 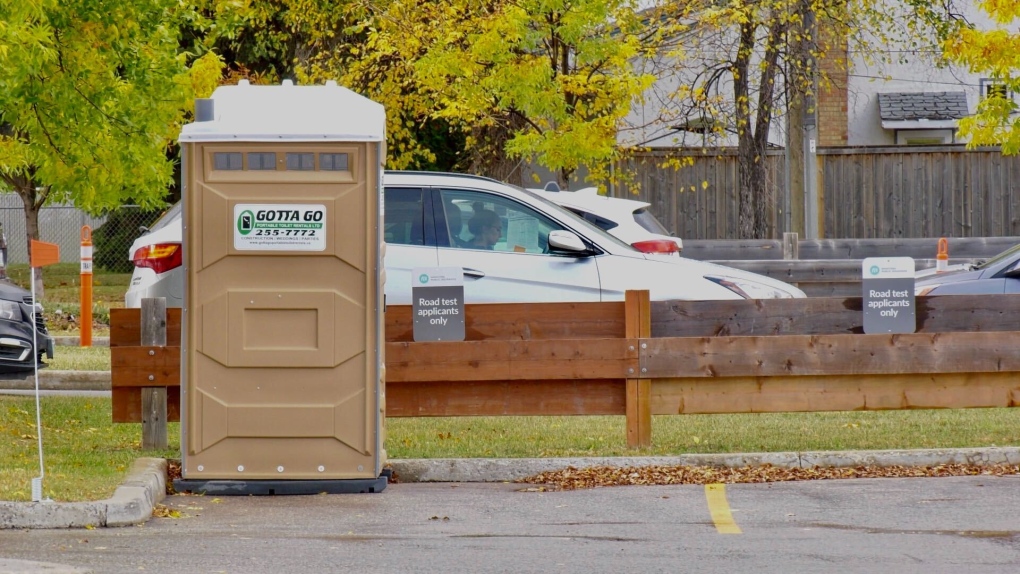 A porta-potty has been placed at the drive-thru testing site in Winnipeg, for those waiting in line who feel nature calling. (Source: Scott Andersson/ CTV News Winnipeg)

WINNIPEG -- With people waiting for hours in line-ups stretching eight blocks long to get a COVID-19 test at Winnipeg's drive-thru testing site, the Winnipeg Regional Health Authority has made a small improvement for those who feel nature calling.

A WRHA spokesperson told CTV News they have installed a portable public washroom at the testing site at 1284 Main Street, in response to 'client demand'.

The porta-potty was open for business as of Wednesday morning, and the WRHA said it is going to be routinely cleaned by testing site staff and volunteers. The spokesperson said the unit is equipped with toilet paper and hand sanitizer which will also be checked and restocked by the cleaning staff.

This new addition to the site comes as some heading to the site for a test have had to wait more than four hours, and in some cases have been turned away.

The new amenity has been placed in the parking lot close to where cars line up for testing.

"The use of the porta-potty is at the discretion of the user and they may need to leave their vehicle in line to attend the unit," the WRHA spokesperson said, adding they will not be watching for anyone cutting.

"We trust that those waiting in the queue would demonstrate that 'friendly Manitoba' spirit with regards to their neighbours in line and would hold someone’s spot if they needed to step away momentarily."

The WRHA spokesperson said the other indoor testing sites, staff will often take a phone number from those waiting for a test if the queue is getting too long, adding this will allow patients to leave the site until they are called back for their turn.

They said this will reduce the need for people to use the restrooms while in line. The spokesperson said each pedestrian testing site does have restrooms onsite "should the need arise."