RCMP officers are battling the elements in the search for two murder suspects around Gillam, Man.

Rain fell overnight and into Friday morning, the temperature dropped, the sky is overcast, and there’s a constant drizzle.

Locals said even on a good day, the woods are damp, mossy, and unforgiving.

RCMP announced Thursday it believes Kam McLeod and Bryer Schmegelsky are still in the area and suggest they may be hiding somewhere in the vast, remote wilderness.

The two are wanted in connection to three homicides in B.C.

“It’s nasty,” he said. “I’ve worked out there, I did some diamond drilling there 25 or 30 years ago and, you know, if the bears don’t get them the bugs will, they’re going to be wet and cold now, probably a little bit desperate.”

The police presence in Gillam intensified over the last two days.

The RCMP’s Tactical Assault Vehicle was unloaded off a flat-bed in Gillam for the second time in two days.

Police could also be seen searching a Via Rail train stopped briefly in Gillam, on it’s way to Winnipeg from Churchill. 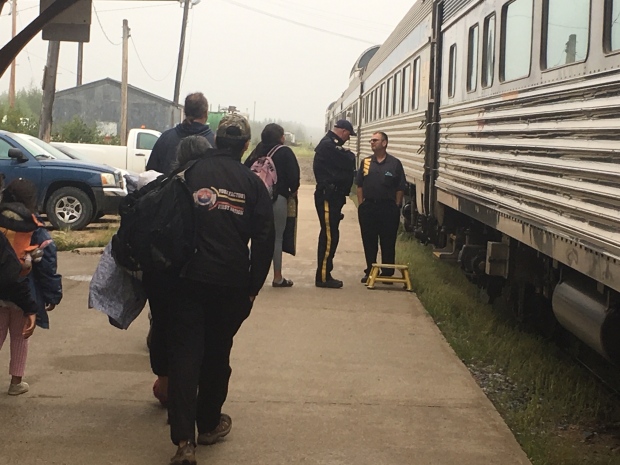 “Well we’re all a little bit jittery. I got grandkids in town and stuff like that, I mean I don’t sleep at night,” said Champagne.

There continues to be a heavy police presence in the Gillam area, as our officers conduct detailed & thorough searches of potential areas of interests. #rcmpmb pic.twitter.com/R6ZHjxCiDl

People remain on alert, on edge, and are taking precautions.

Co-op manager Karen Donnellan-Fisher runs the only gas station in town. She said employees are working in pairs while the manhunt continues and people can stay home from work if they’re feeling uneasy.

“We’ve had a couple initially that were a little nervous, some parents that, you know, maybe don’t want their student kids coming in,” she said.